Compassion on the Sand

We are…to a degree… one in life.

Every spring they come.

They come to propagate, sure. But they come to bring a bit of happiness to those who await them. That’s us, the wingless denizens of the shore…we’re all sure of that.

They are the oystercatchers of Long Beach, NY.

Our oystercatchers lay their eggs right smack dab in the middle of the beach, not under the boardwalk or the ramps or deep in the dunes. They must know that these are places where feral cats or even raccoons may lurk. They do have an advantage in the open in that they can see danger approaching and take aggressive action.

And they do take such action. They attack approaching danger with piercing shrieks and red-dagger stabs. they will even launch aerial combat missions on their own species if they intrude:

Oystercatchers even chase off intruders of their species, as yesterday, above.

They are successful in repelling interlopers…but not always. Predator gulls are bad enough but sometimes knuckle-dragging predator-pubescents run amok on our sands too. There was a report last year that an apparent twelve-year-old broke one of the eggs right on the boardwalk. I wish these birds could crap brick-bombs on egg destroyers.

But there always seems to be drama unfolding on our Long Beach shores. Last year I found a chick in the morning fog apparently killed by a gull. Many among us root for tentative life as it struggles in the wild. We can relate to their trials, we’ve had our own. So I was a bit attached to the little guy having photographed him many times before. I buried him under the boardwalk, marking his grave with a piece of driftwood:https://leebythesea.me/2015/05/31/so-fragile-so-precious/

(Edited: Since publishing this post I added addition links to past oystercatcher posts. See bottom of page.)

This spring, the day before Mother’s Day, a high tide over-washed a nest, one of two Long Beach nests. Three eggs were strewn into a cold, brown, slime. Water temp was 46℉. Sad, sad ending once again, right? Not so fast. 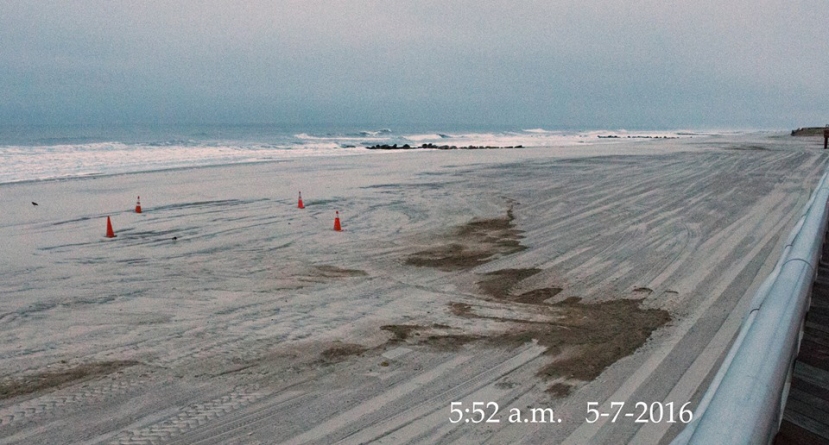 Action Annie came along, as in Anne M Bickford on Facebook. See link at bottom.

Anne saw the dismal scene. But she didn’t just stand there wringing her hands and feeling bad. She moved. She took action:

Ann reports that as she got closer she saw one oystercatcher at the shoreline come closer to what had been the nest. She says that it seemed to her as if it were calling to her for help. And she responded.

She said she quickly walked to the nest area all while the parents were upset making their “tea-kettle” shrieks. But they weren’t charging at Anne. I guess they were as devastated as  human parents would be under similar circumstances. We are…to a degree… one in life…I think. 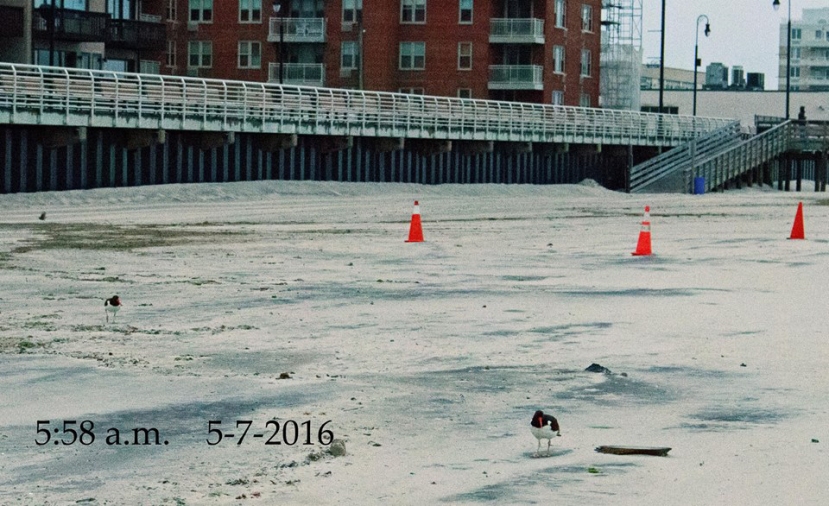 Anne saw that the nest was empty and searched the area looking carefully at the muck left by the tide. She had hoped that the eggs hadn’t been washed out to sea.

But she found the eggs. They were separated in the brown mire but were still intact. She reports she was so grateful that she didn’t take any photos of the tide-tossed eggs. More power to her. I sometimes wonder how people can make a video of folks in distress rather than help. But help Anne did. She scooped up the eggs and took them to the center of the cone area, dug a new hole with her foot and gently placed the eggs inside.

I can easily extrapolate from her action that she would also provide CPR to a fallen person, or yank someone from a burning car…with the same lack of hesitation. Anne worked and prayed that the birds would accept the eggs again.

As she completed her morning task she was pleased to see that the mom and dad did accept the eggs and the new nest. They even began a renovation on her work, much as we Long Beach human denizens had to do after devastating hurricane Sandy flooded these same shores a few years back.

She did re-sit the eggs as verified by Bill Obrien:

Back on eggs immediately after tide-wash. Photo by Bill Obrien

(Update edit: Sat, 5-15-16 One week after the tide wash, I took this shot of Mom still sitting on her eggs. Seems to me she’d know if the eggs weren’t viable after a week. Lookin’ good, Momma!) 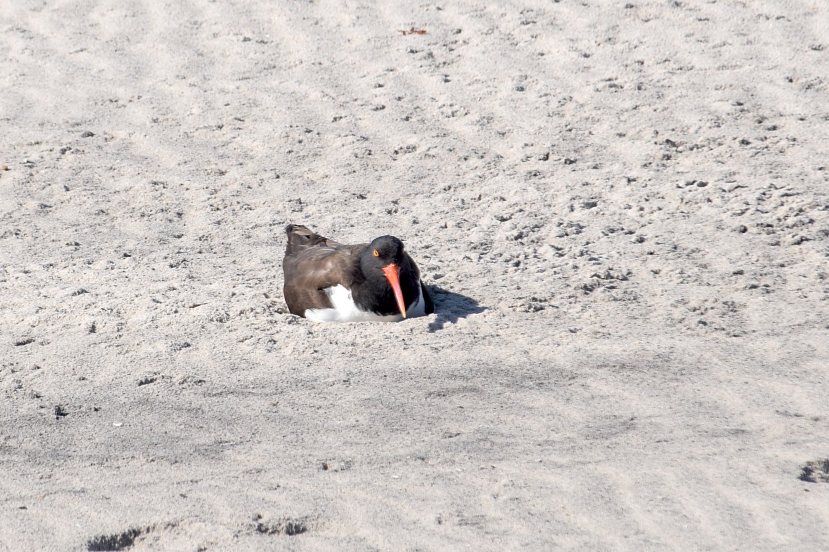 Mom on eggs, one week after tide wash.

I raised ducks when one of my kids was allergic to fuzzy animals. Muscovy ducks, the breed doesn’t quack to annoy neighbors, and they were fun for the kids.

I did notice that the hen duck would on occasion roll an egg out of the clutch,(the group of eggs in a nest), break it and eat it, shell and all. I presume she knew viable life was no longer contained therein or perhaps…that it was deformed progeny? And why waste the protein, she presumably thought. So if this oystercatcher hen continues to sit these eggs, maybe all is well and there’s a chance for survival.

Time will tell. In the meantime:

The easternmost nest had its blessed event, three chicks ventured onto the sunny sands of Long Beach Thursday, May 12.

Mothers Day arrived a few days late this year at that locale…but arrive it did and I was there among others to catch some shots. 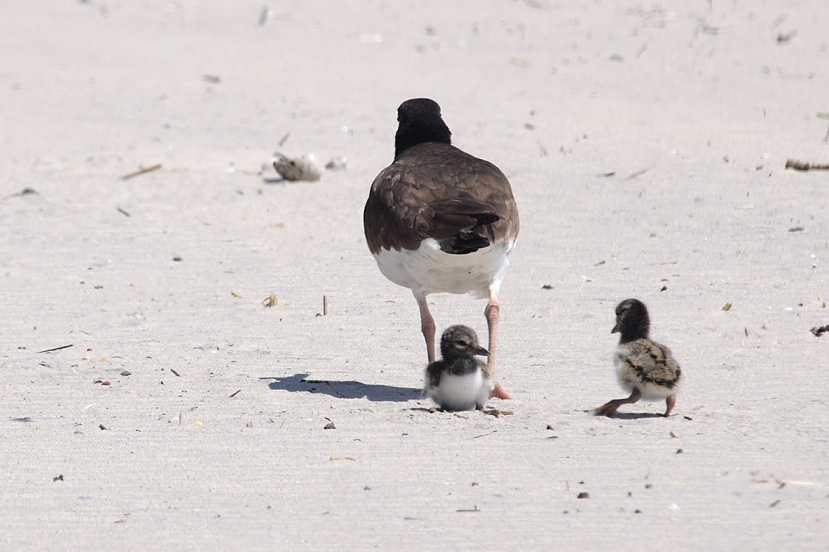