The Fragile and the Furious 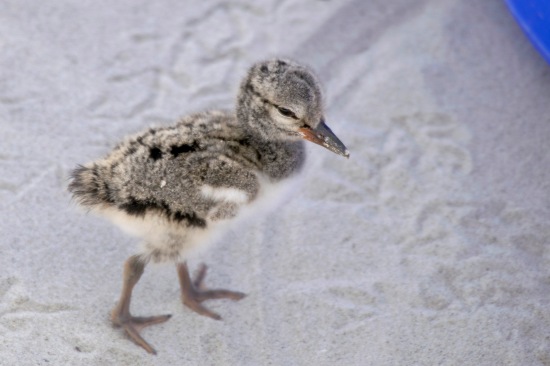 “maybe it’s time to treat all beings as members of our civilization.” See first link.

Long Beach, NY is conspicuous for its compassion for the creatures with whom we dwell. You might recall the seal pup blog that waded ashore last month for instance: http://tinyurl.com/seapup

And you also might recall last May’s blog posts about our local oystercatchers: Size Matters, https://leebythesea.me/2014/05/24/size-matters/

These beautiful creatures insist on laying their eggs right out in the middle of the open beach. As soon as they are spotted sitting on eggs, our City by the Sea protects them from beach traffic whether foot or wheeled. They do so by setting up a perimeter of cones and cord to mark out the area in the bird selected hatchery. 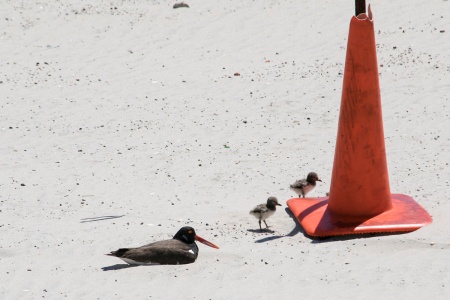 This year was no different when at the end of April the eggs were laid on the beach at Magnolia Blvd. There they nestled their eggs in a “scrape”, a depression in the sand. The eggs were then guarded by mom and protected our fair city. Some three to four weeks later the eggs hatched and two chicks burst into our seashore world. 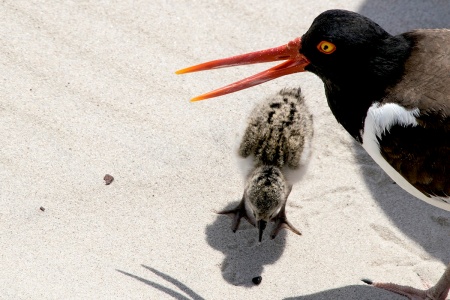 FYI: oystercatchers are usually monogamous and often return to and defend the same nesting area. They also practice “egg dumping”, laying their eggs in the nests of other species, like gulls, to be raised by them. Adoption by ignorance.

But a funny thing happened this Memorial Day weekend: 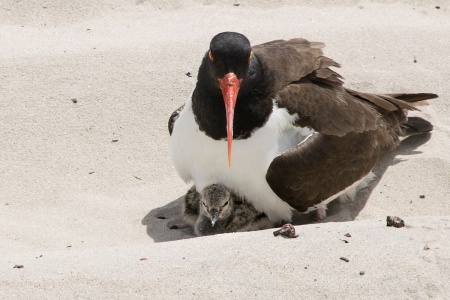 When I went to “shoot” the birds Fri, May 23rd, the perimeter set-up was intact. But on Sunday, the 25th there were neither cones nor cord to be seen. The mom, dad and chicks were sitting ducks, if you will…Memorial Day weekend.

As I took photos from a safe and non-invasive distance I had to keep warning beach trekkers to beware of the mom and her chicks. Sometimes I wasn’t quick enough and mom or dad would fly screaming and threateningly past the heads of the interlopers. I was very busy trying to take photos and warning walkers and a couple of youngsters who were about to toss a football back and forth. I felt obligated to maintain a Zone Defense for this family. 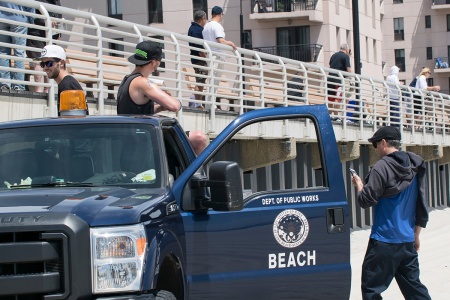 A Public Works beach truck happened by and I chatted with the friendly staff on board. They had no knowledge of why the birds were suddenly left unprotected. One staff member, apparently outraged, said, “I’m going to report this.”

But then that special sense kicked in, you know the sense to take that extra step you’d like all you come in contact with to have. The motivation to act and not just report or pass on a need that could be addressed immediately. I think it was his innate compassion that led him to say, “I’m going to replace the cones myself, right now.” and away he drove. 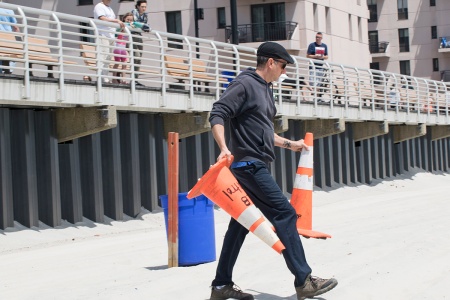 He was back in minutes. But when he started to replace the cones the mom and dad were not too happy. They didn’t interpret this cone-wielding interloper as friend. Every time he tried to place a strategic cone he’d be chased with rapier beaks and incisor talons. 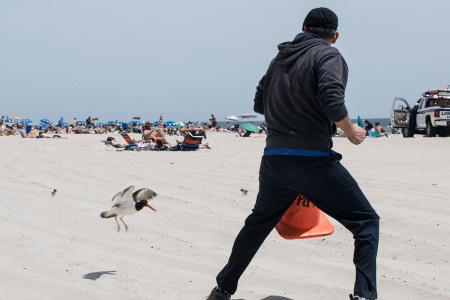 He darted here and there placing a cone and scrambling to the next spot with another. Each time the brave mom or dad charged and challenged him by invading his own safe zone. 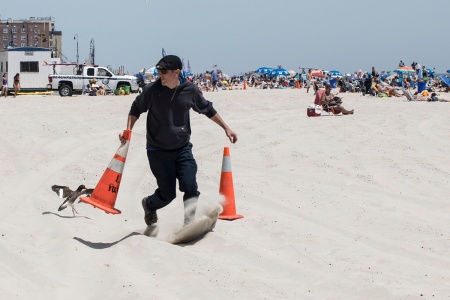 When he’d duck and scoot away, sand flying from his heels, I’d hear delightful laughter from the children on the boardwalk “gallery.” But this worker got the deed done. 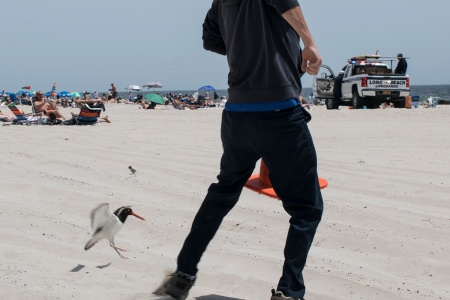 So kudos to him. This is a very cool, very dedicated guy.

After all the excitement, the oystercatchers found a nearby safe haven next to a lane post and a recycling bin. There they enjoyed shade and hidden morsels. 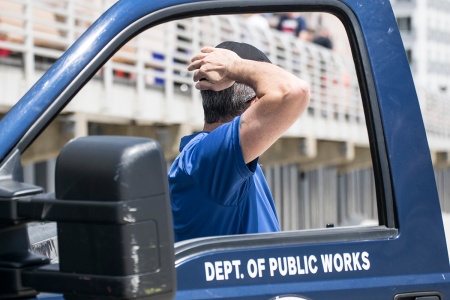 Maybe the’ll move back to the nesting-site perimeter when they feel it’s safe again. The presence of the cones, whether the shore birds are within the perimeter or not, serves as a warning to other shore denizens, us, to be wary. Maybe signs should mounted atop special cones, “Vulnerable Wildlife Area.” Can’t hurt, might help. 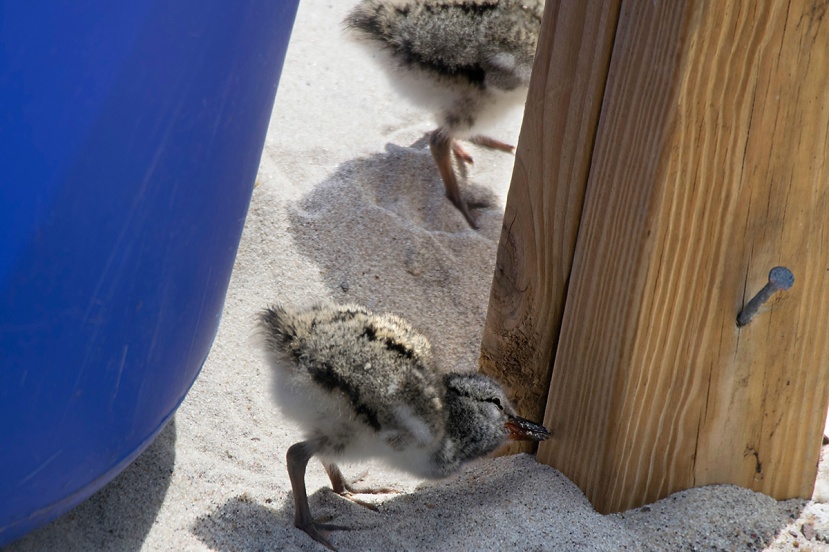 If I embarrassed you, artful dodger, remember, “No good deed goes unpunished.”