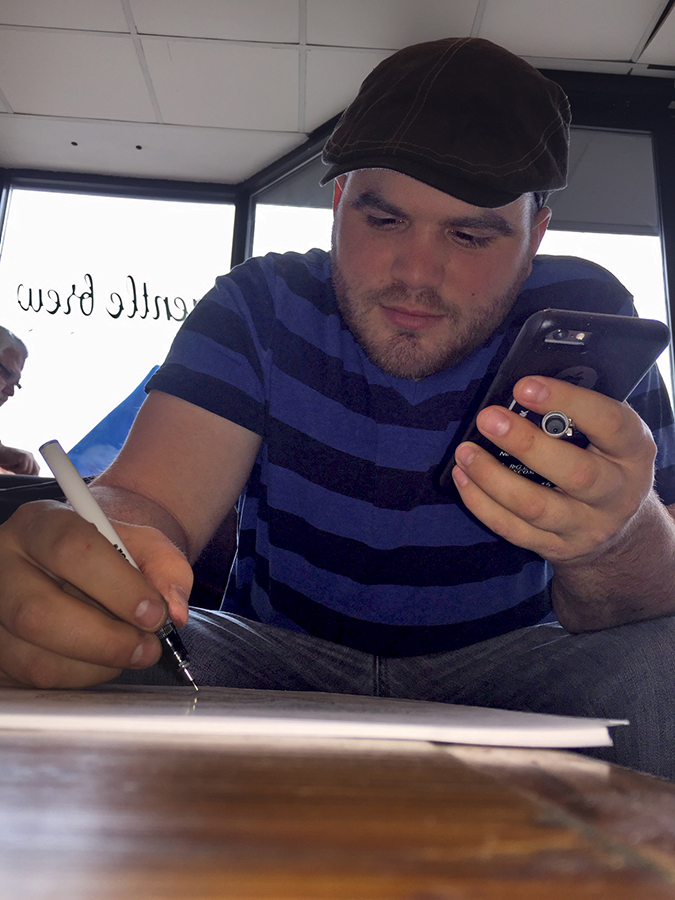 Yesterday afternoon I parked my bike in front of Gentle Brew and walked in. The place was busy but I did find a comfy arm chair in which to sip my half-caff.

Across from me sat a young man whose appearance made me feel I was in a Paris cafe. He was squiggling. No, he wasn’t moving around in his chair as if he had an itch from a new laundry detergent, he was drawing.

After a bit of sipping and watching I asked him about his work. He said he makes squiggle  drawings of babies. At the time he was using a baby photo on his iPhone as a model for his drawing. He said the phone photos are from friends on Facebook. Like this: 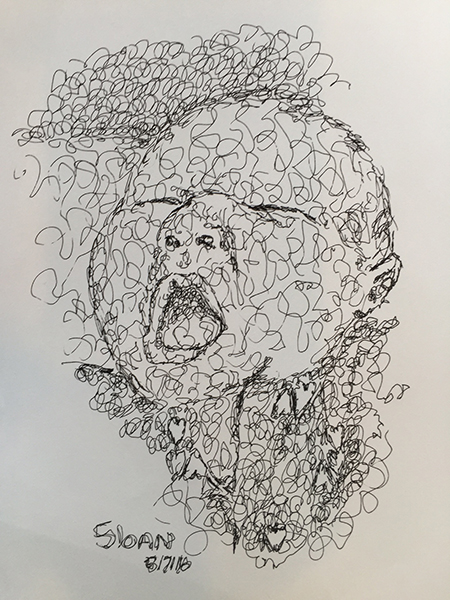 I learned that his name was Ryan and like so many artists who bring much good stuff to our little blue planet, the good stuff often doesn’t put food on the table. He has to work at other jobs to do that. The world’s the poorer for that sad fact.

Ryan said he works in King Kullen’s meat department now after a three year stint at the North Shore Animal League, one of New York’s well know pet adoption facilities. He loves animals. He loves drawing too… especially squiggling. He also works in acrylics. Ryan’s  a graduate of C.W. Post college, he majored in graphic arts.

Innate gifts that won’t pay the rent don’t just dissipate  if one is passionate enough about them, they keep coming to the surface, in garage bands, coffee house tables…or blog pages. Here’s another of Ryan’s iPhone photo renderings: 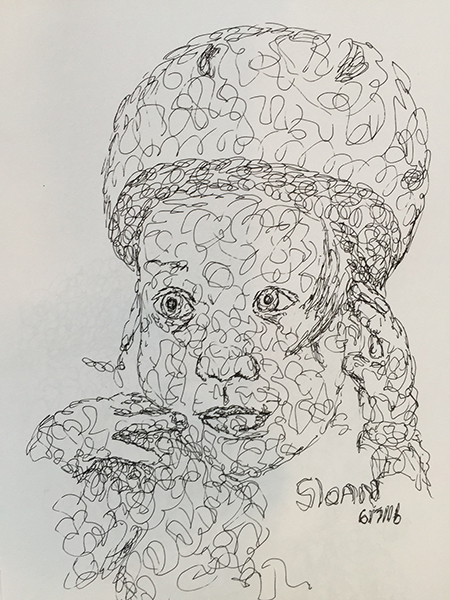 I suggested to Ryan that he might sell some of his work, maybe to moms with babies in tow on the boardwalk. He wasn’t comfortable in approaching people like that, he said. I made a couple of alternate suggestions in how he might sell his work and he appreciated my ideas.

But just then a young mom walked in with a baby in her arms. I said, “There you go. Why not ask her if you can make a photo drawing?” He shrugged. I said, “I’ll do it, if you’d like.” He smiled and shrugged again.

So off I went to the coffee pick-up area and approached the young mom. I explained that I write a blog and was going to post something about that young man over there who draws babies. I said, “He’d like to draw yours. Is that okay?”

She smiled as only a proud mother can when her baby is appreciated. She said, “Sure.” I asked if I could take a photo too and mention the tot in my post. Again she said, “Sure,” and smiled. I noticed that the barista behind the counter smiled too as I took a shot of Vincent. There was a family ambiance in the coffee shop unfolding, a warming trend I’ve observed. Kinda like…a springtime in the Andes.

Vincent’s mom had to go back to the cream and sugar bar, the line had been long. But by the time she was finished there, voila…Ryan had finished too…with his first drawing. 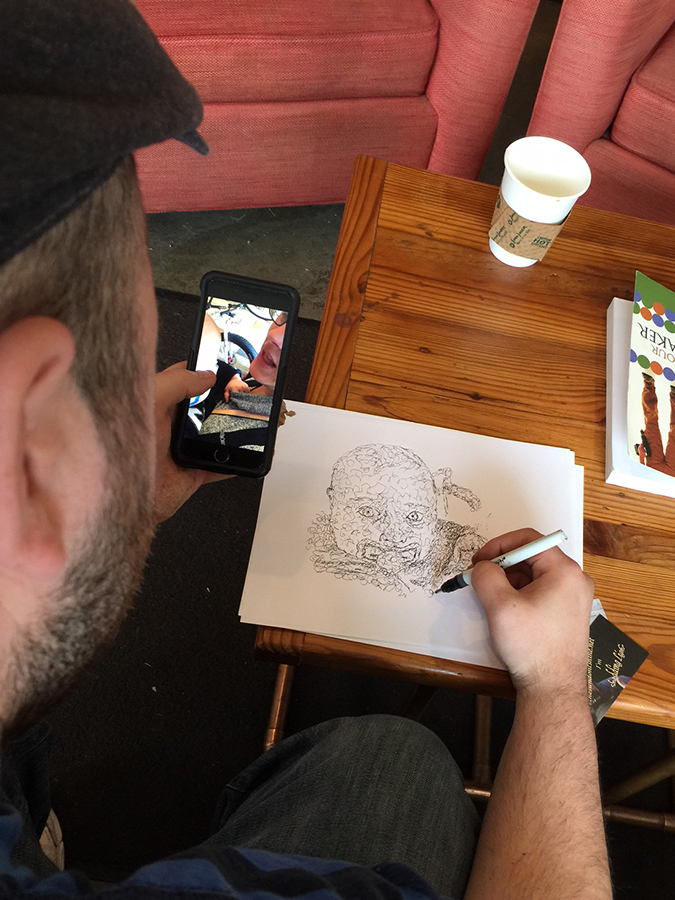 He made this second drawing from a photo I took of Vincent: 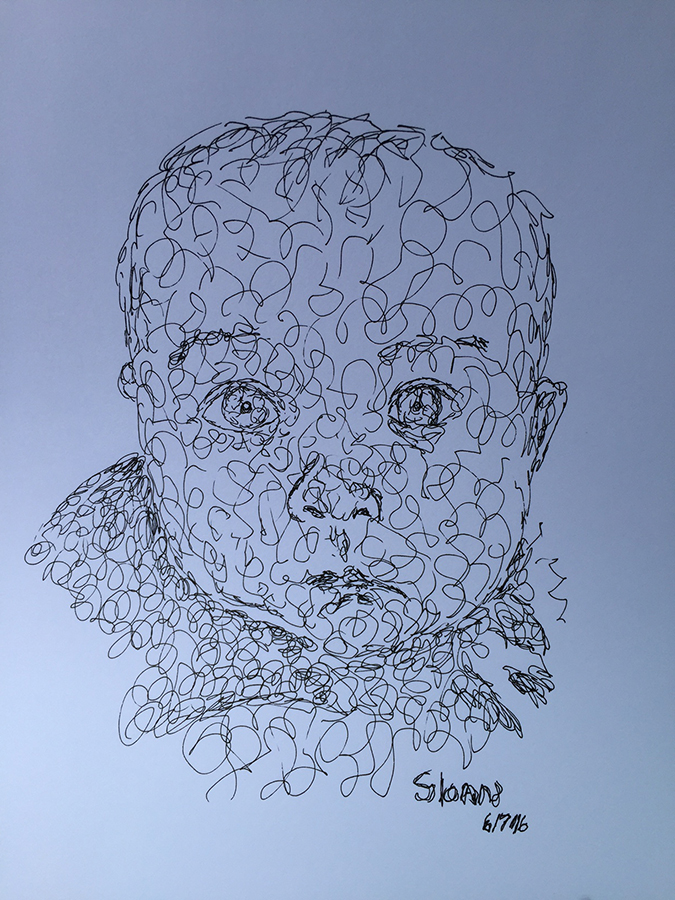 He’ll email both drawings to Vincent’s mom. Don’t know if he’ll ring up a sale. But Vincent’s mom has a nice Mother’s Day presentation from Ryan.

If any of you guys are interested in a squiggle rendition of your baby, give Ryan a shout: sloan.r@hotmail.com or visit him on Facebook: https://www.facebook.com/SloanSquiggleArt/ He’ll squiggle draw your pooch too.

I’m sending him a photo of Bailey.