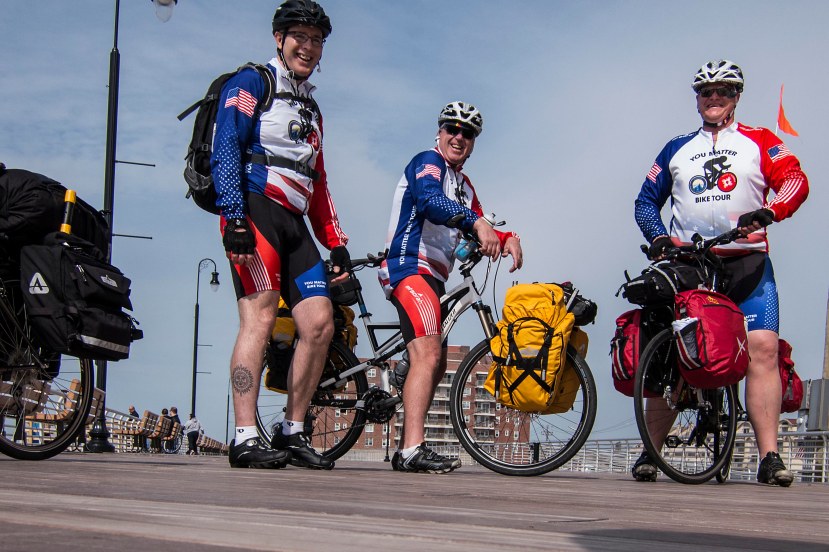 I took a bike ride on our boardwalk this April 22nd morning and came upon three hardy cyclists who were off for Long Beach CA on the You Matter Bike Tour. The tour is teamed up with the Intrepid Fallen Heroes Fund for the ride. It’s to raise awareness and funds to assist veterans with Traumatic Brain Injury TBI and Post Traumatic Stress Disorder:http://youmatterbiketour.com 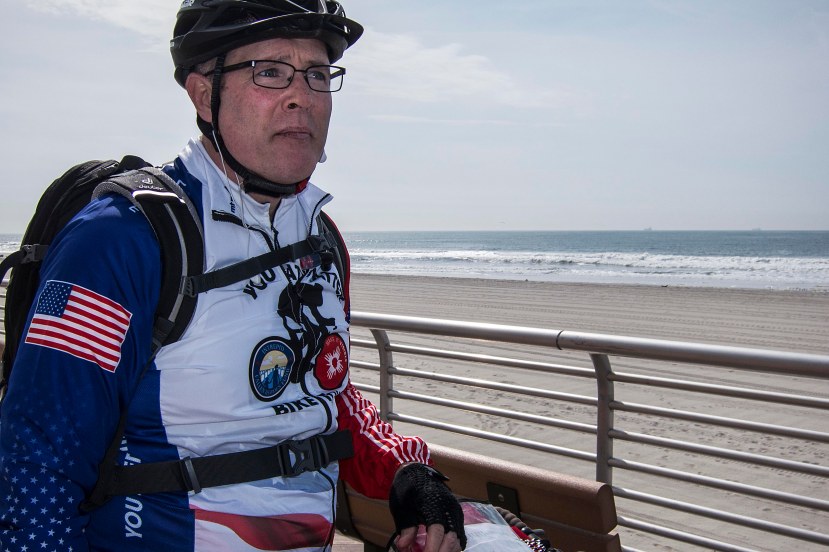 Ken Carr, above, one of the organizers and cyclist suffers from TBI himself. He and his group loaded their bikes with supplies at Laurelton Blvd. for the 5,000 mile trip. The group received a police motorcycle escort on the boardwalk here to the West End’s New York Blvd ramp to head West to NYC and the U.S.S. Intrepid. From the Intrepid they will ride about 70 miles a day stopping at points along the way like the Liberty Bell, various veterans hospitals, Fisherman’s Wharf in San Francisco then Long Beach CA and the Queen Mary that is docked there. 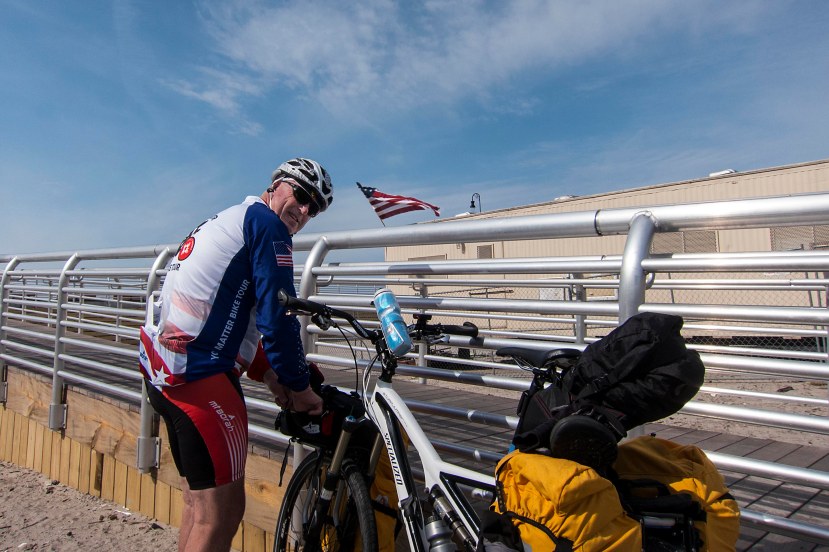 This is of course a fantastic effort for a great cause. But will someone please explain to me why this great country of ours doesn’t provide the needed support these veterans deserve? Why must they have to bike or perform any other feat to raise funds or raise awareness for assistance? It’s very simple, we asked, they served, we owe. Case closed! 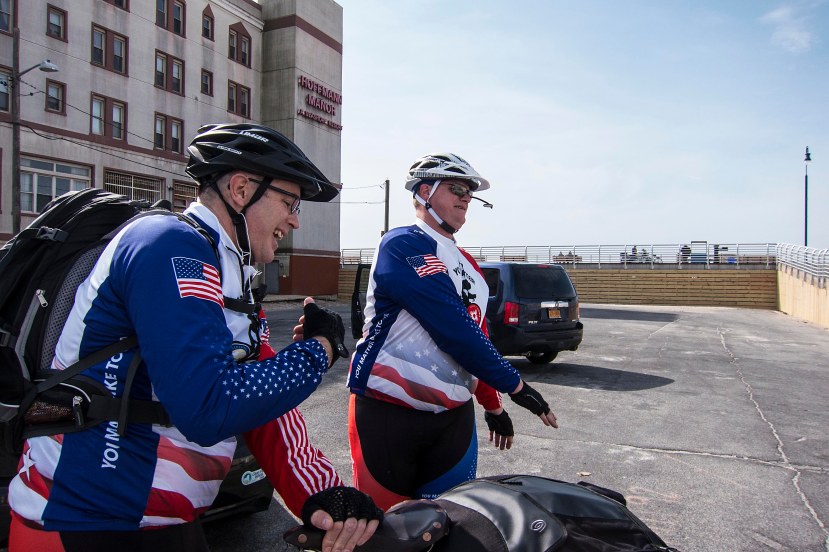 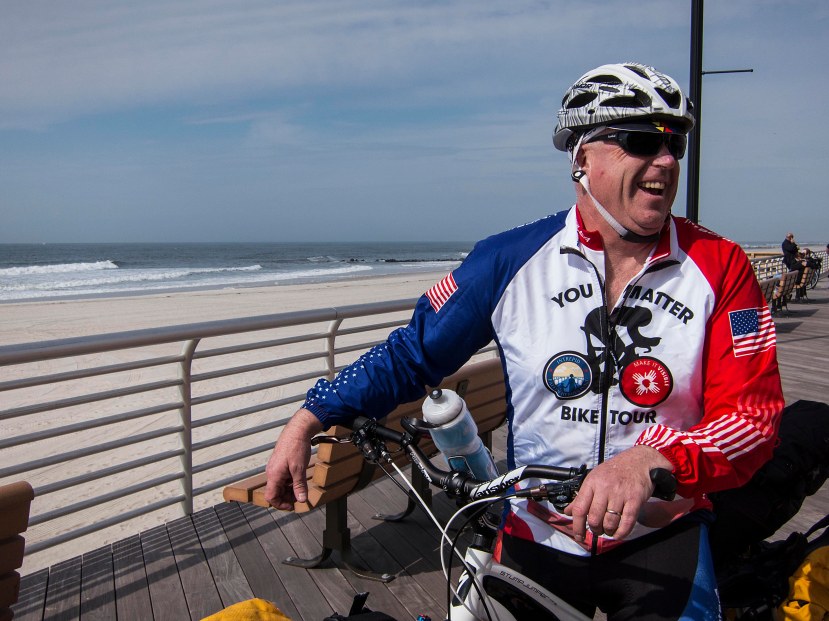 The group was in good spirits as they geared up, then Ken told me they’d first like to stop at his mom’s, Kathleen Carr’s memorial bench on the boardwalk. He said it was right in front of the Hoffman Manor right at Laurelton Blvd. 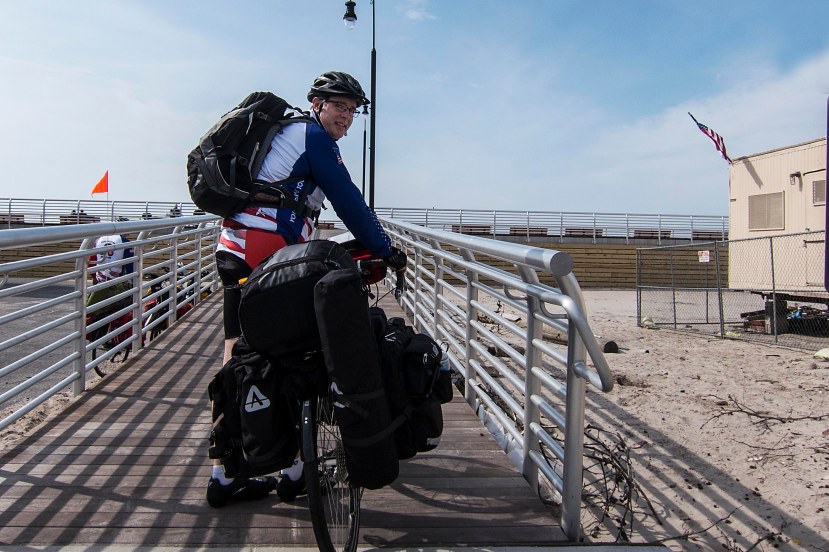 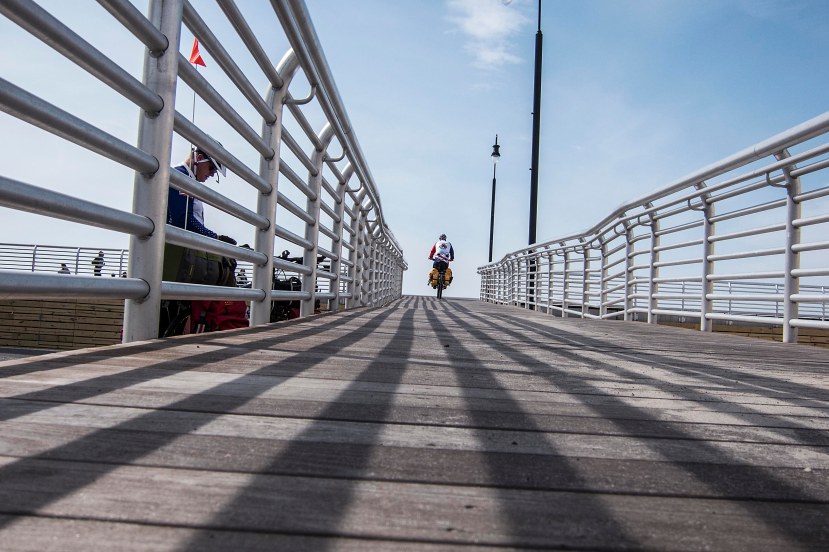 But when we got to that spot the bench was no longer there. He told me he heard the benches were relocated after hurricane Sandy tore down the entire boardwalk but he didn’t know where it was re-placed. Angela, a support member of the group, looked at many benches nearby but couldn’t find it. I told the group I’d find the bench after they left and email a photo of it to them. A daunting task as there are many hundreds of benches lining the 2.2 mile Long Beach boardwalk’s railings. 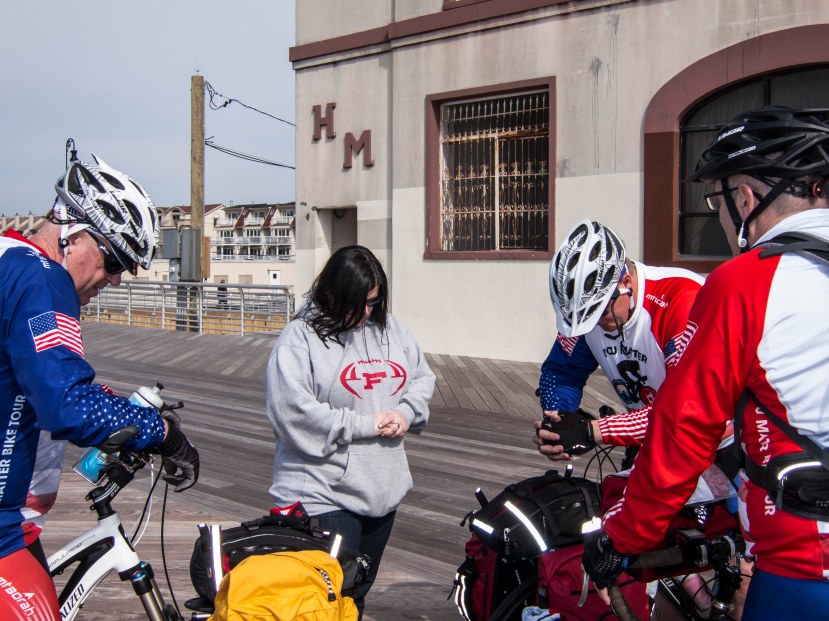 The group paused in front of Hoffman Manor anyway to say a short prayer for a successful effort and safe trip. 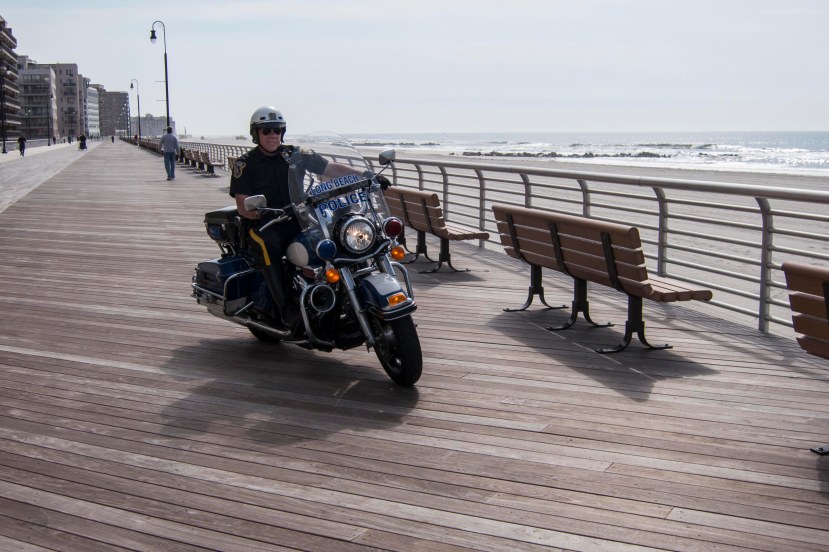 I watched as the Long Beach Police Motorcycle escort led them west to NYC and Long Beach, CA.

I followed them along the boardwalk giving them a head start to get a few more shots but then I couldn’t catch up with the motorcycle and the experienced long distance cyclists. I can’t understand why. I sometimes make two round trips on our boardwalk…on a good day. 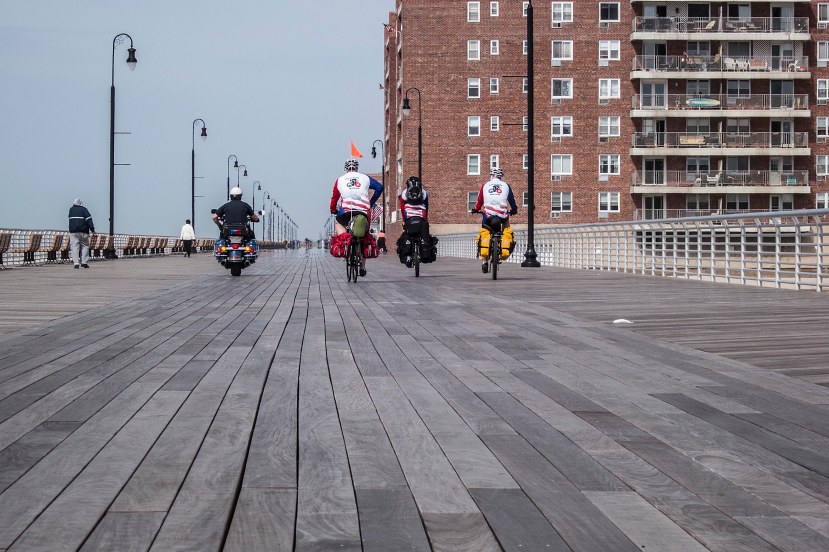 After the group biked down the New York Blvd ramp I started my quest for the Carr bench. I thought as long as I’m at the West End I might as well start here and now. I planned on trying to bike and foot-glide between the benches and the railing the entire length of the boardwalk until I found the Carr bench. It didn’t look easy, I had my day cut out for me.

But when I got to the first bench that faces the ocean on the West End, it was the bench that said, Kathleen Carr. Oh boy. Talk about synchronicity. Her bench wasn’t at the Hoffman Manor spot it once was but it did find itself placed right by the ramp that took her son on his most noble trek. 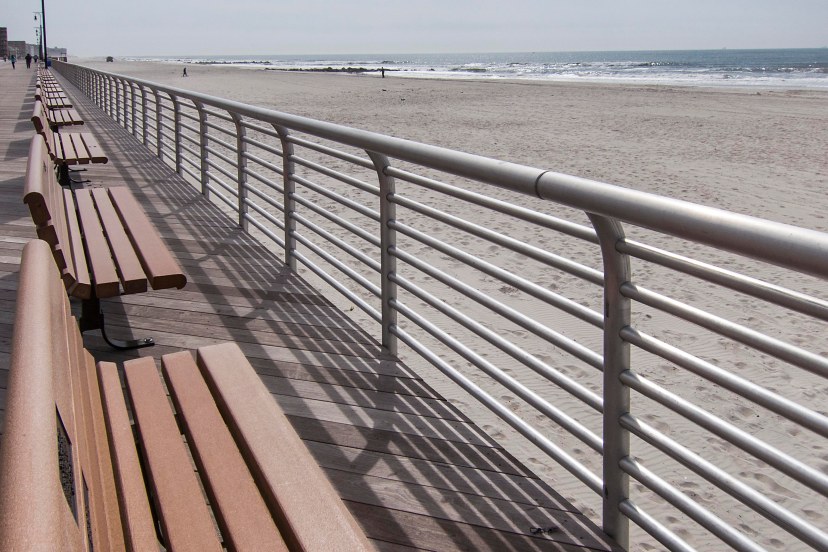 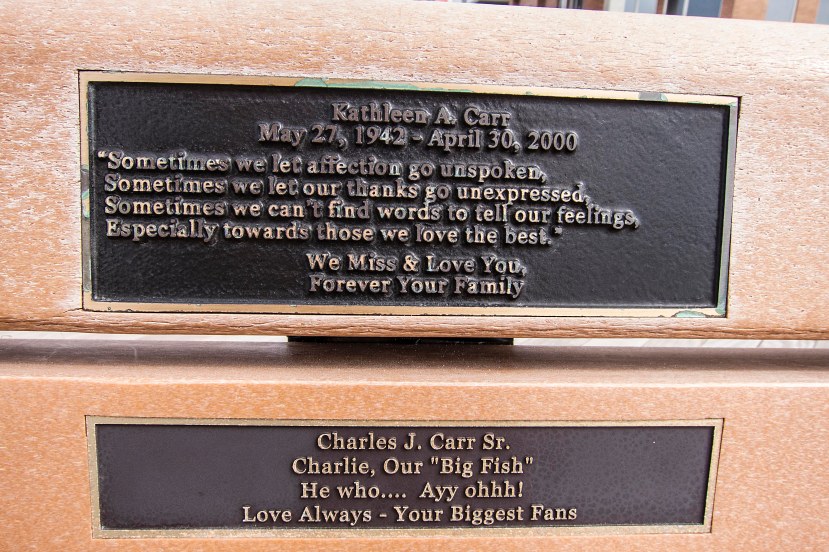