Many of us only use one gear on our bikes…and one gear of our lives.

Then there are those who use every cog of every gear, of their bikes, of themselves. They ride for the personal challenge. They ride to help others. They just ride and ride. 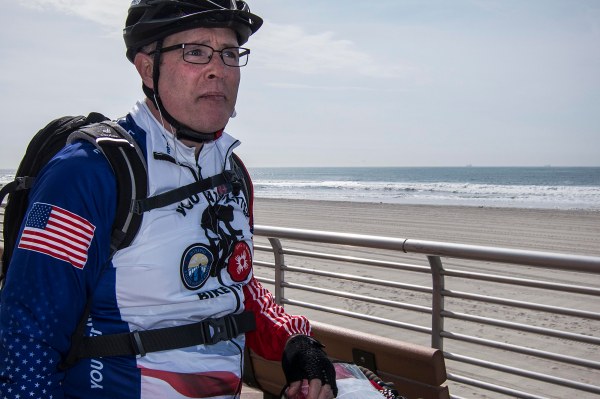 Ken is a Navy veteran, a Fireman, who has service-connected Traumatic Brain Injury (TBI). He advocates for veterans who have that diagnoses as well as those with Post Traumatic Stress Disorder (PTSD). He made his amazing You Matter Bike Tour with support of the Intrepid Fallen Heroes Fund. His goal is to help fund the nine veteran TBI centers to be completed across America.

Ken departed from the vicinity of his mom and dad’s Long Beach memorial bench. Kathleen Carr, West End of the boardwalk.

When he left me in Long Beach, the spring of last year, he headed for the USS Intrepid docked in Manhattan. He and his two buddies, Bryan Howard and Steve Redmond, who would ride part of the trip with him, met with the Intrepid Fallen Heroes Fund President, Dave Winters (No relation to this writer). Next stop Philadelphia and the Liberty Bell, the exhibit opened an hour early for them. 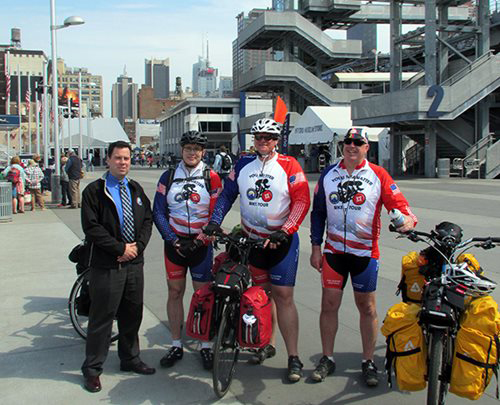 Ken rode a heavy Trek 520 bike. Most cross country riders use lighter carbon-fiber bikes, Ken said. But he chose the Trek 520 because it was a “tried and true bike.”

He also started out way overloaded, carrying some 115 lbs of gear. Now that’s like taking a young lady along…who doesn’t peddle. He packed such a big load so as to have some equipment to display that was provided by sponsors. He’s that kind of responsible reciprocator. But he also wanted to have a tent big enough to accommodate him and his bike. Too much. Way too much. He had to jettison 24 lbs of gear in PA. It was all a learning experience. He did learn…then he did ride on. 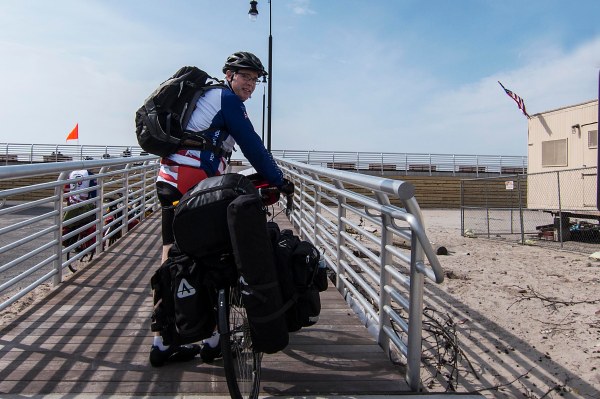 Ken Carr leaves Long Beach, NY with his 115 lbs of gear. Maybe he should have just left the gear on the ramp…and taken his girlfriend.

On the second day of his ride, Kenny’s big toes swelled up like “balloons” due to new bad-fit shoes. He said, “I should have switched them out but I was headstrong to keep pushing forward.” He compensated by transferring pressure to other parts of his feet for the rest of his ride. Today he still has numbness in those toes.

He went on to DC and the Lincoln Memorial, the National Cemetery and the nine TBI centers across America in various stages of completion.

Ft. Belvoir VA, The Intrepid Center of Excellence (NICoE), was the first. He said, “…visiting it was very special. Seeing the veterans’ new realities expressed through art was extremely powerful and easily the most poignant moment of the trip.”

Then he ran into trouble.

He admits to being naive. The descent down the Blue Ridge mountains in VA took well over an hour, and he didn’t know that if you use the brakes too much you have to pull over and let them cool down. And with all that weight, he didn’t do that.

The hot brake pads pressing on the rims turned the rims red hot. He was traveling about 35 mph when the heat caused the rear inner tube and tire to blow out. He found himself hurtling downhill with a blown tire, locked brakes and red hot rims.

Finally, screeching and skidding on the back rim’s bare metal he tumbled over and landed with a thud. Dogs nearby were “screaming” at him. A swarm of some kind of insects descended on him.” He felt battered. It was “kinda biblical,” he laughed.

He only suffered bangs, bruises, and scrapes, thanks largely to the panniers, rear saddlebags, (with 90 lbs of gear) that took much of the hit for him as the bike tumbled. Maybe all that gear did come in very handy after all.

A truck driver happened along, (don’t they always come along to the rescue), and gave him a lift to a nearby diner. There, the diner’s owner had a customer use his truck to take him to a bike shop in Lexington VA.

The rear rim’s lip was badly damaged, the skidding caused a good eight-inch-long grind-down of the lip that holds the tire on. A replacement of the rim would take a week he was told. Not an option. But a blacksmith nearby, (Yes, New Yorkers, I said a blacksmith, just like the movies), made the rim somewhat serviceable. All no charge.

He did get about seven flats with that make-do repair but at least he wasn’t grounded for a week. That blacksmith got him on his way, without the week’s wait, from Lexington VA to Wichita KS, over a thousand miles.

Just short of Wichita, he stopped in a driveway and a farmer just happened to be leaving in his pickup. The farmer was leaving for his in-laws to do some work but when he heard of Ken’s plight, the bad rim, he put Ken’s bike on his truck and drove him to Wichita and a bike shop, The Bicycle X-change.

At the Bicycle X-Change, Ken told a worker what had happened. The service manager overheard him tell about his ride for veterans. Ken said, “The Manager had the worker put on a new rim and new chain. They went over the bike from front to back and anything that had to be replaced they replaced, free of charge.”

I spoke with the Service Manager of Bicycle X change who likes to be known as just “Bike Man.” He recalled the incident. He said, “Yes, we take care of veterans, they take care of us.” Simple, straight to the point…powerful in its simplicity.

In Salida CO Ken needed additional work and was given the same gratis accommodation by Absolute Bikes of that town. I spoke with Scot Banks, head mechanic, who also recalled Ken and his bike. He knew of Ken through Steve Redmond, the vet who rode part of Ken’s trip. Scot says he supports veterans but he also likes to just make people’s lives, “happier and better,” that’s all there is to it. Such profound thoughts come in such an economy of words from these Americans. 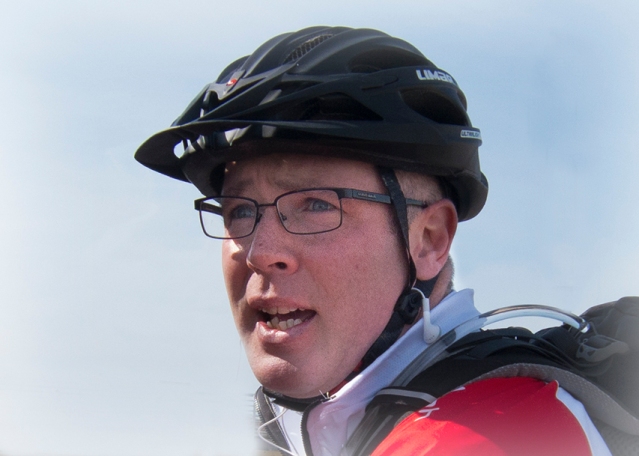 Do you see two patterns emerging in this post, dear reader?

The first: Kenny Carr may have been naive in wearing shoes that didn’t fit, packing too much gear, riding downhill with all that weight bearing down ceaselessly on the brake pads, all rookie mistakes he admits. But his heart was as big as his bulging panniers…if you’ll pardon the expression.

The second: Americans he came upon saw that heart, saw the determination in this lone rider. They did their part again and again to help a veteran…help veterans.

Ken said he’s very happy with his trip and was very moved by the support he received along the way. Most Bed and Breakfasts gave him lodging and food without charge. He was cheered on by many Americans on his journey. At times it was tough going at his pace of 70 miles per day. Looking back he recalls how sometimes he slogged through the rain and sleet but he said his thoughts of our veterans spurred him on. 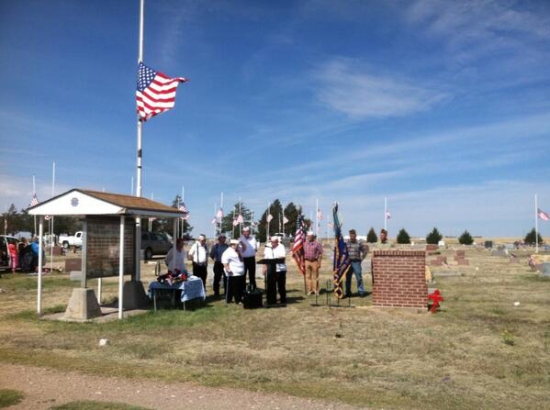 Ken said they raised about $10,000 between what was donated directly to the You Matter Bike Tour and other donations to the Intrepid Fallen Heroes Fund. He said, “One company donated $2,000 alone.”

When Ken prepared to leave Long Beach on Apr. 22, 2014, I noticed no one was there to note his selfless task for our vets. Not Long Island’s Newsday, not the Long Island Herald, not one NYC publication. Not one public official. Just me, a lonely blogger and Long Beach Patch, Star Patcher, and one Long Beach PD motorcycle escort. And I just happened upon Ken and his You Matter riders.

Ken rode that 5 grand of miles across this American nation. His toes swelled, his brakes burned out, he flattened his rim, he took that biblical spill…but he rode on.

At his last thirty miles, he was joined by about a hundred cyclists who honored and cheered him on. At last, at long last, after over two months of butt crushing riding, he finished his journey from Long Beach, NY to Long Beach CA, from the USS Intrepid in Manhattan to the Queen Mary in Long Beach CA.

And on the Fourth of July he finished his journey. On that storied ship, which transported allied troops during WWII, he was bestowed medals by Commodore Everett Hoard and enjoyed a fireworks display he will remember forever. That is an American hero using all the gears he was born with…for others. 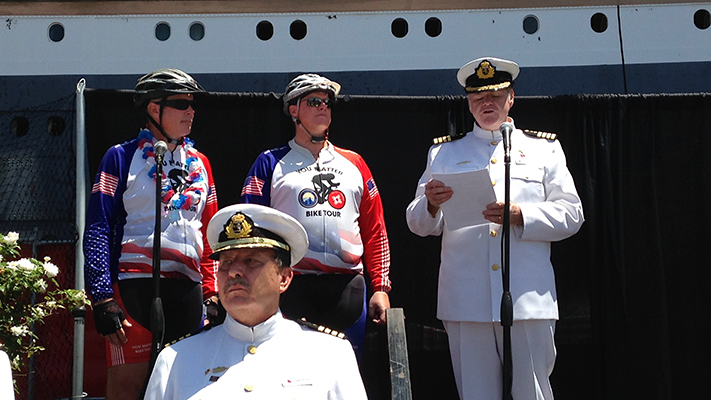 America, I think we can do better than that.

Do you know what it feels like to drive 1,000 or so miles, say NY to Miami? A long numbing trip, for sure. Hows about riding a bike five times that distance?

Don’tcha think we can support this guy and his cause?

I see Ken’s journey as a mirror image of us, trekking across this lifetime on Earth. We’ve never traversed it before, we make mistakes, we carry too much baggage, we’d be better off letting go of some of it. We burn out, we fall. We help each other.

It just so happens that I recently got a pretty good check. So, like a bike-shop owner, like a diner owner, like a truck driver, like a blacksmith, I’m supporting these vets, these one percent of Americans who serve, with a tax deducible donation.

If you’re in, here’s the link:

Kenny Carr is now into stand up comedy. I’m telling ya this guy’s got some big…panniers. Find him on Facebook to catch his upcoming gigs.

God bless all who helped Kenny,

Message from Ken Carr re: donations:

Thank you both very much for your donations! Because the main benefactor of Intrepid Fallen Heroes, Arnold Fisher, pays for all the admin costs of the organization himself, 100% of your tax deductible donations will go directly toward the construction of state-of-the-art special treatment centers for veterans suffering with traumatic brain injuries and post traumatic stress.