When Bone Meets Board

After a visit to Long Beach’s Top Hat Barber I was biking home when I spotted a man laying on the boardwalk ahead of me. He let out a piercing groan.

As I approached and dismounted I could see that his leg and ankle were broken…it was kinda obvious. People ran to his aid among them a nurse from Manhattan Veterans hospital who comforted him and advised him to remain still. Along side him was a skateboard. 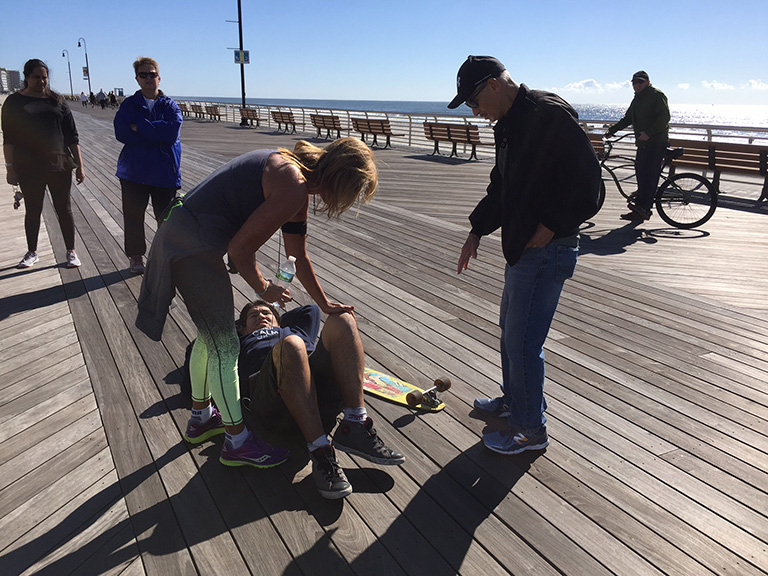 Someone had called 911 but I knew calling the Long Beach PD directly at 516-431-1800 was the best for a fast response. I did so, giving the location, boardwalk between Lafayette and Washington. A beach Animal Control Officer patrolling nearby arrived on the scene in minutes, called in the details, then calmed the man. 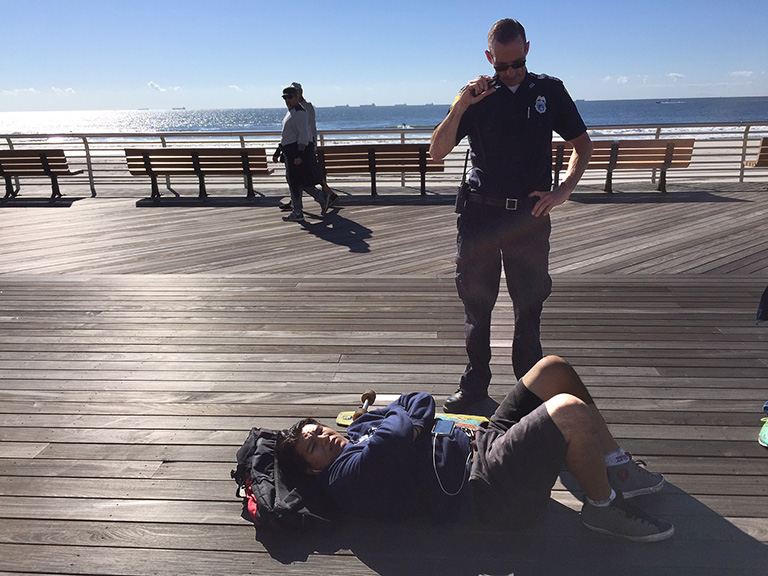 Nick Lujan, the twenty-one-year-old injured male’s sudden calmness was dramatic. I’ve seen many people in similar situations, having fallen down subway stairs, or hit by a car, or the victim of violent crime with obvious broken bones but few became as calm. 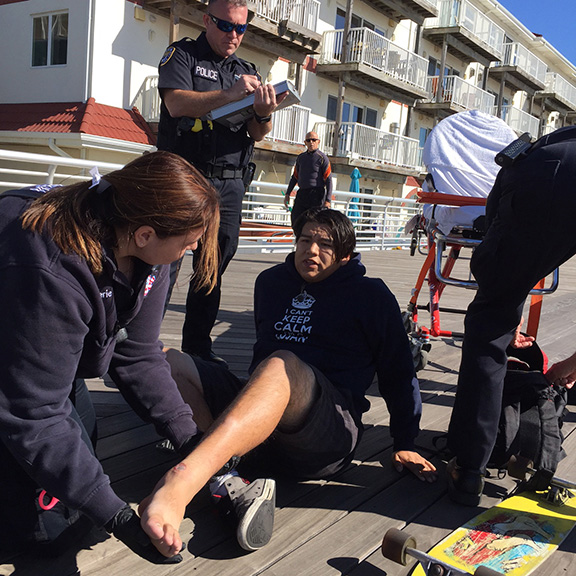 Emblazoned on his sweatshirt was “I can’t stay calm, I’m a Lujan” I asked him what Lujan was. He said it was his family name. But it was ironic that the shirt announced, “I can’t stay calm…” when obviously…this Lujan can. I suggested he join the Marines.

At one point the Animal Control Officer even had Nick laugh…just a bit. Sometimes having a victim take his mind off the pain helps the situation. 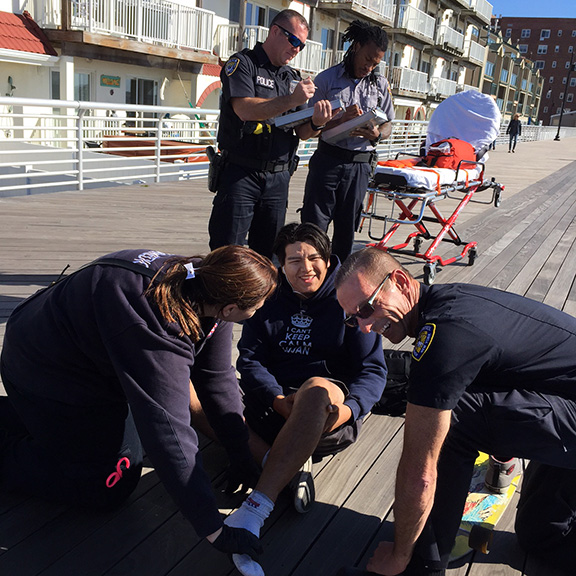 Nick and the Officer laugh.

Several more minutes and an ambulance and an additional Long Beach officer arrived. By 11:15, twenty minutes since the fall, Nick Lujan was on a stretcher and taken to the hospital. 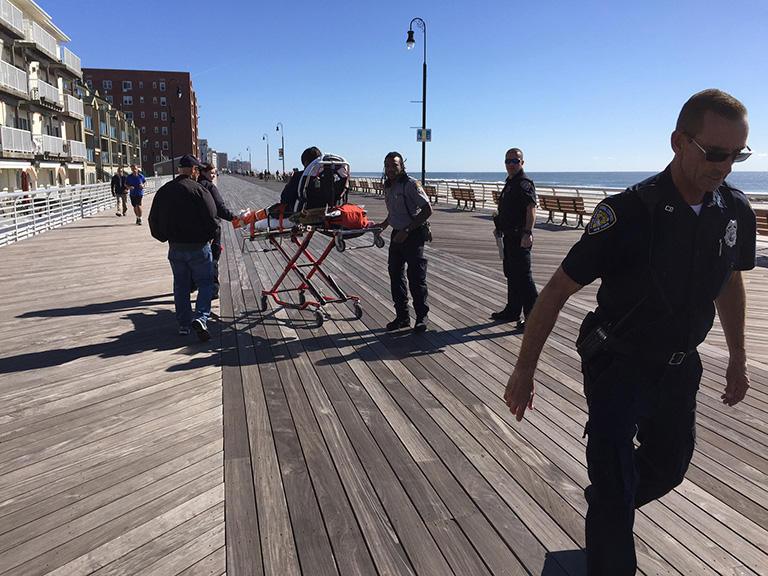 Nick’s at home now recovering as best he can, he’ll be scheduled for an operation soon. He’ll be out of work for a while now, he’s an electrician apprentice. He said he had given up skateboarding in his teens due to a popped knee from a fall but had taken it up again this summer.

He said the ambulance took him directly to South Nassau hospital in Oceanside where he reports the treatment there was good. He said he does have a high tolerance for pain but he did scream when they had to put his ankle back in place, even after receiving morphine first.

He knows he shouldn’t have been on the boardwalk with a skateboard but was doing so because skateboarding the streets means dealing with drivers who are “jerks”. But after this fall, dislocated ankle, and fractured fibula…he’s going back to bike riding.

Riding skateboards on our Long Beach boardwalk is a violation among many fineable offenses on our famed walk. Riding bikes down the ramps, dog walking, even smoking is prohibited. But people do violate these rules and do suffer the financial consequences, a fifty buck fine in most cases. The rules are there for a reason. Sounds trite but sometimes the reasons are painfully brought to bear…when bone meets board. 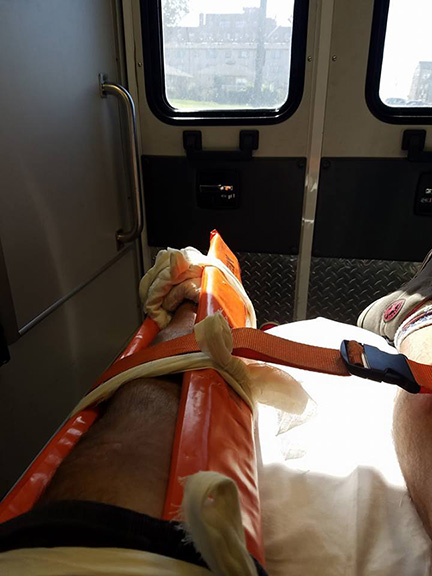 When bone meets board. NIck’s leg selfie in ambulance

Our City by the Sea’s police and ambulance response worked well this day. But I wondered where our Long Beach City Manager Jack Schnirman was this time. He did a little responding himself one day when a young lady fell off her bike and broke her ankle: https://leebythesea.me/2014/04/10/734/