They sing songs 20 minutes long for hours, they leap over their water-stage and pirouette in aerial grace. They are the humpback whales off Long Beach shores.

Long Beach strollers have been provided with quite a sea show of dolphins and whales these recent years. Some think it is due to climate change. I found a sand dollar on the beach this summer, an item usually found much further south. We see dolphins  very often along our shores, much more so than in the past.

Long Beach dolphins were almost in the orchestra section of The Theater by the Sea.

But it’s the whales that are providing the most excitement. Some whales migrate immense distances, the farthest migration of any mammal. The longest recorded was almost 12,000 miles from American Samoa to the Antarctic Peninsula, about half the circumference of our globe. National Oceanic and Atmospheric Administration. (NOAA) http://tinyurl.com/NOAA-whales 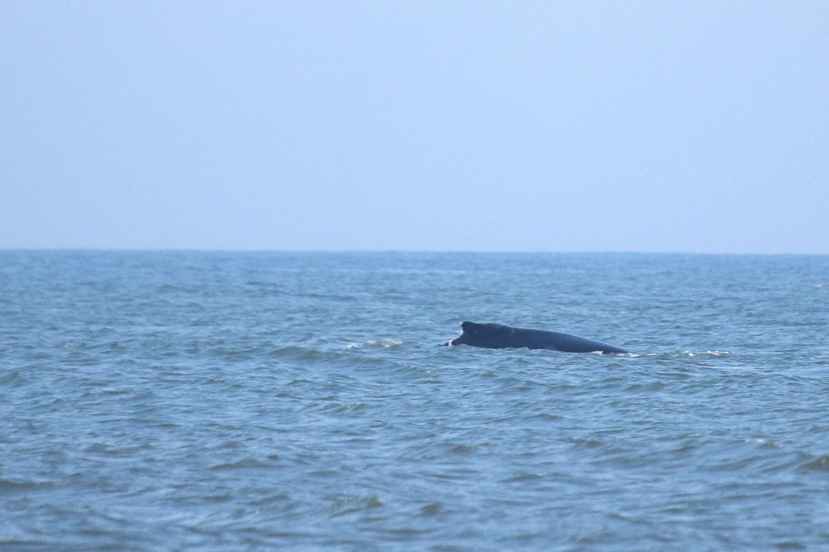 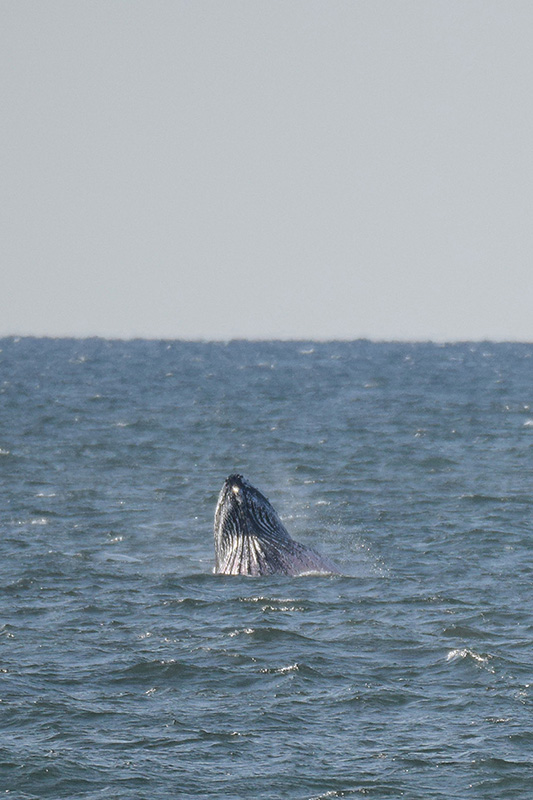 A humpback scans the house.

Most local whales migrate from their summer feeding grounds off Maine to their winter digs near the Dominican Republic. In their migration they pass through the New York Bight.

The waters off our Long Beach shore are part of the New York Bight, the wedge formed by the South shore of L I and the New Jersey coast.

There are various species of whales that migrate through the Bight:

But in our seas, the humpbacks are the most plentiful. And they are the most active too, often leaping, breaching, sometimes twirling…then thumping upon the sea stage that is their home.

Sometime they use air bubbles to herd the Prius weight of fish they consume every day. Some grow to 60 feet long and live 50 years.

They have been off our Long Beach shore to feast on the schools of bunker (menhaden) for many weeks now. Sometimes the whales are far off shore and only the boats following the schools, or drone cams can get a good photo of them. But you can see the puffs of spouting mist easily from shore.

A humpback whale spouts amidst the watercraft off Long Beach, NY

I spot whales fairly often these past few years, mostly blowing their mist into the sea air, but sometimes I’m able to catch a few popping up or lunging out of the water. 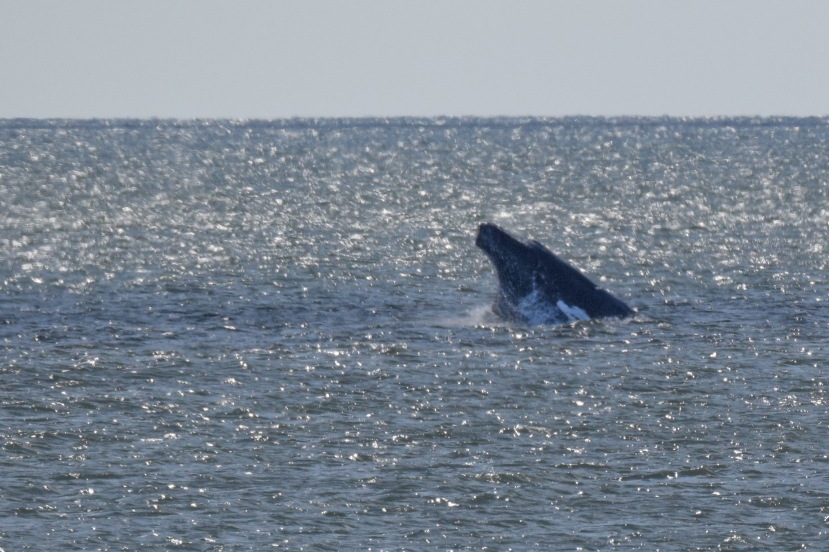 Some attribute this lunging as a scan of the surface area by the whales for boats, other say it is the momentum of the rush in feeding.

Still others theorize that whale’s breaching and water-thumping is to rid their body surface of parasites. I’m no Marine biologist but could it be…they are just having fun?

Some whales chase bunker schools as close as two jetty lengths from shore.

Many photos capture this action but ya gotta be quick to spot and focus. Some people who have never spotted a whale from our Long Beach boardwalk have asked me how I spot them. I hesitate to disclose this secret of the seasoned seamen but:

I pull the visor of my salt encrusted Marine corps cap down over my lined and weathered brow and squint ahead through the blazing sun. And when I see the ladies and tots at the boardwalk rail jumping, pointing and shouting, “Oh my God, there’s a whale, there’s a whale!”…I look that way.

I really do spot them via jumping-rail-ladies but I also just ride my bike along the boardwalk with an eye seaward and catch a spouting whale. Often a flock of gulls over the surface or a fleet of fishing boats is a good hint that a school of bunker is beneath…and perhaps, a whale. A good example of a bunker boil producing a whale for me: http://tinyurl.com/Oct-whls

I then wait patiently for the spouting whale to surface. Sometimes it moves further down the shore far out of my camera’s range, laughing at me, I’m sure, as it lunges out of the water, even breaching. Breaching is coming all the way out and splashing down flat on the sea’s surface. But sometimes I do get just a little bit lucky. 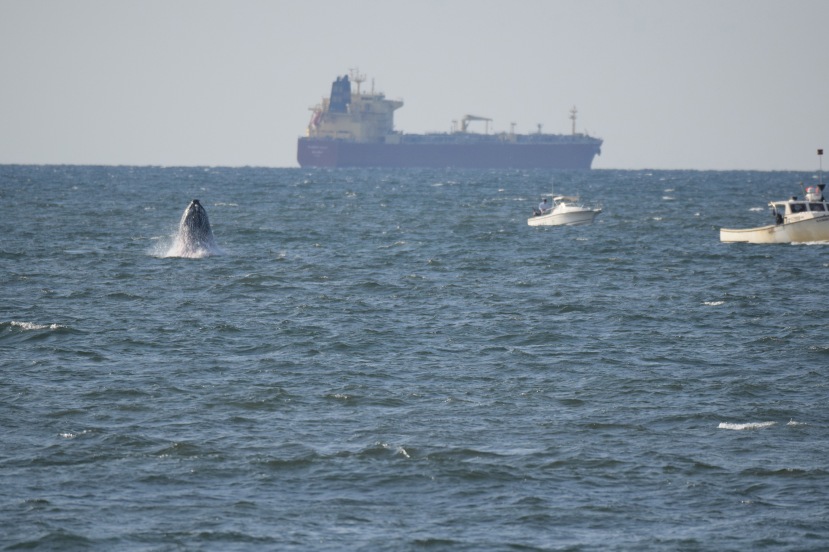 Whales suffer from humankind’s impact on their environment. It appears it’s our nature to impact the environment of creatures with which we share planet Earth. But sometimes the impact is painful to know.

Whales become entangled in fishing gear, they get hit by passing ships, they suffer from whale-watch harassment, recreational boat traffic, acoustics from vessel operation ( the vessel sounds are often the same frequency as the whale songs and hampering communication) and harvesting. National Oceanic and Atmospheric Administration. (NOAA)

Humpbacks are the most active of whales, ships sometimes injure or kill whales.

There’s just something about the majesty of these 40 ton masses of life gracefully bursting through the ocean’s surface. There is the awe of their songs, songs with themes that go on for hours interrupted only by pauses to breathe. (NOAA)

This 2014 shot of a Humpback was taken on the American Princess off Rockaway, NY by Long Beach local, Dennis Guiney

With their famous leaps and twenty minute ballads we might think of the humpbacks as the sea’s song-and-dance feature presentation. 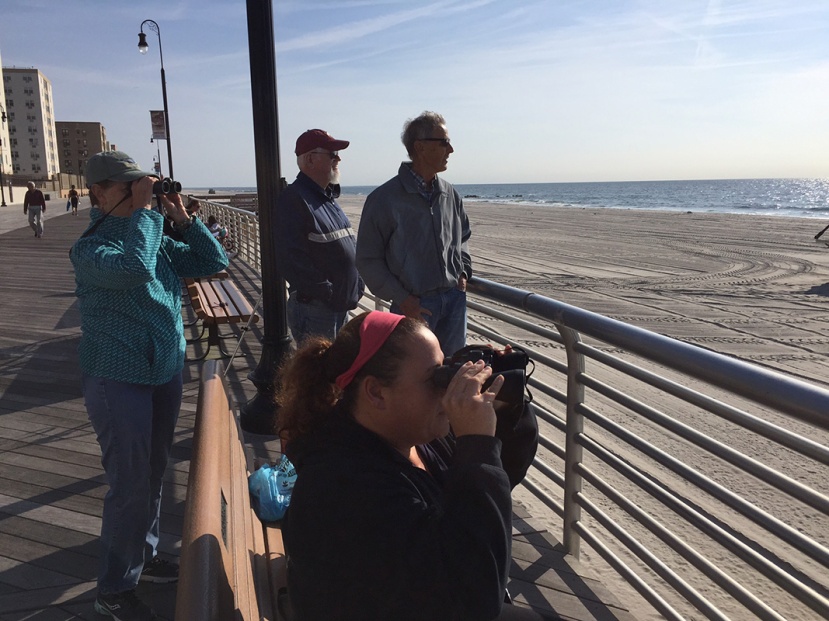 A group of whale watchers, front row, balcony, at the Long Beach Theater by the Sea.

In these most troubling of times it’s therapeutic to take in the ocean’s show of shows. It lightens the heart, it buoys the spirit.

Audiences find themselves not only enjoying the show but rooting for the casts’ survival with a message from the heart, “Encore, encore”…with every Baryshnikov leap. I’ve heard people shout out to the whales, “Whooo Hooo!” I’ve heard people applaud. I’ve even seen people…adults…actually jumping in joy.

Your own heart might jump at this magnificent drone-cam video by Long Beach local, Jason Belsky. If you play it full screen you can see the bunker rushing  to the surface just before the whale breaks through:https://www.facebook.com/jasonbelsky/videos/10153608241917358/

(Except for the guest photo and video at the end of this blog post, I took these whale shots over the last three weeks from the boardwalk of Long Beach, NY)