I’ve been exposed to some people of late who are bursting with creative enthusiasm.

A boardwalk bike ride brought me to a shop that stood out against most of the new boardwalk vendor frontage, it had a Tiki awning with bar stools lined up against a “bar”. Now that might not strike you as very creative till you find out the spot was originally the least desired on our Long Beach, NY woodwalk.

Shakes and Shuckers on the Long Beach, NY boardwalk

I pulled my bike alongside Shakes and Shuckers and spoke with Greg, the owner. I commented on the great spot he had at Lincoln St on the boardwalk, the most popular surfer beach on our shore.

But I was surprised to hear him say, “It was the least sought after spot on the boardwalk.” That was because of its lack of customer-use interior space. Greg showed me his interior and it was all work space. Coffee urns, soup kettles, work station, etc. But I think it was the lack of interior space that caused him to think outside the clamshell.

Shakes and Shuckers staff, Antonio, at his work station.

So his frontage has a very appealing welcome to summer strollers and the year-round surfer dudes who will be coming all winter for hot cocoa, coffee and lobster bisque. Not a bad combination of limited space and unlimited imagination. I wondered if he had had sufficient indoor space would he be inclined to produce this pearl of an exterior. 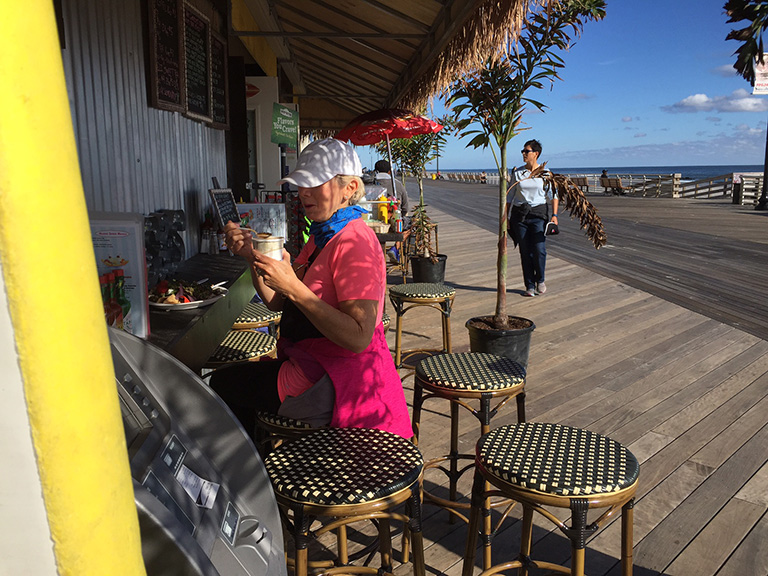 One local Long Beach photographer, Anne Bickford is not only a creative photog, she’s also uses her creativity in her compassion:https://leebythesea.me/2016/05/13/compassion-on-the-sand/

She has a photo site you can visit at: http://www.redbubble.com/people/annedb

When night, light, snow and Anne came together

She now has a showing of her work at a great place called “Starving Artist Cafe and Gallery” in Franklin Square:http://www.starvingartistcafe.org

So up I went with Cheryl on the thirty minute drive to the Cafe Gallery. Anne’s stuff is on display in an alcove of the enchanting cafe. Even the address has a storybook theme to it. It’s at 1045 Tulip Ave. It’s open 12pm to 9pm.

A recent Facebook commentator said the term “starving artist” is redundant and from my life observations that’s right on the money…or lack of same.

When Cheryl and I entered she said, “I feel like I’m in Boulder again.” I agreed as we admired the decor from hanging picture frames in the skylit cathedral ceiling to the various artfully done accoutrements of comfortable dining.

I was sure the proprietor was long experienced in art or interior decoration so I spoke with co-owner and manager, Carol Ceraso about it. She has long experience in cooking and managing in large restaurants but short experience in decor skills. She originally wanted to get into a pizzeria business but when the opportunity came to take over these premises, a former bar, she and her husband Jeff went for it. And they got creative. 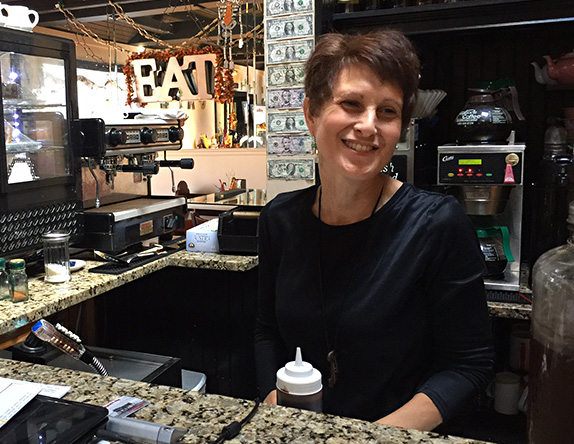 Jeff, a former contractor came in handy in changing the business from a dingy bar to a bright comfy Cafe. Her sister, Diane provided the dazzle.

The couple expected to have a young crowd because of the proximity of the schools but it turned out that a more mature crowd gravitated to it and Carol finds it’s a very good turn of events. “Every Fri night we have live entertainment, light music, acoustics, jazz, piano keyboard, flutes, violin, no rock bands though,” she said. We commented on the Colorado look and Carol said, “Some people say it’s like SoHo some people say Maine or Vermont.” But it’s obvious people love it.

Comfort all around at Starving Artist Cafe and Gallery

I asked why she wants to run a business like this. Carol said, “Cooking has always been my passion.” “Passion”, I always like to hear that word used when people speak of their endeavors. She likes to interact with customers, her husband more so. But she often finds herself in the back cooking and he’s in front chatting with diners. She says, “I have to say, ‘Get up you’re bothering these people.’”

I asked Carol about her sister, Diane and the decor. She said Diane, a teacher, comes at season changes and holidays and adapts the decor. She also said Diane provides challenges for Jeff to handle the frequent changes. 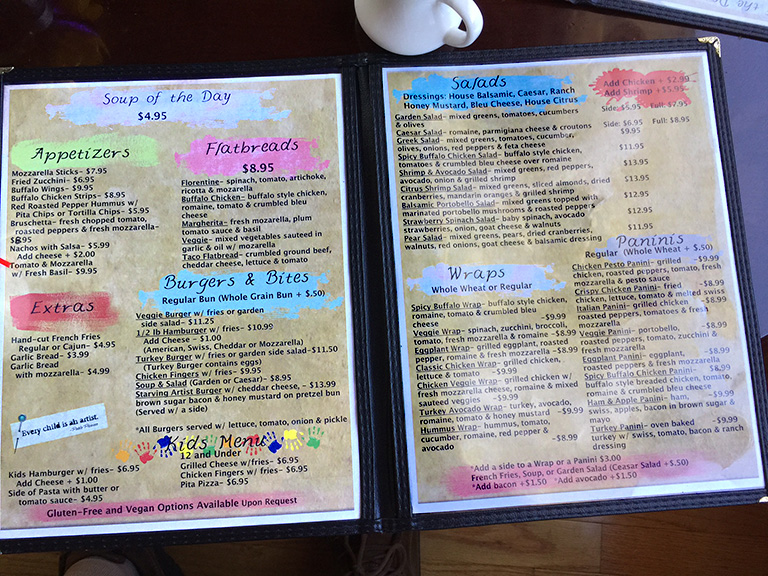 The menu at Starving Artist Cafe and Gallery

I had the Italian Pannini at Starving Artist, Cheryl the vegetarian had the Vegetable Tower. Mine was very good, her’s was great, she let me share a bit of it.

I chatted with Jeff, he’s a former contractor and, having been in business since 1982 he handles that part of it; Carol does the cooking and Cafe operation. He said, “She’s been in the cooking industry for 35 years.”

He said the idea of “this business was more her dream” than his but he went along with it. When I asked about his sister-in-law’s changes of decor he said, “Yes, that’s funny, she sometimes comes in at the end of the day with stuff and by that time I don’t want to be doing nothing but going home. But I grin and bear it. Because if it weren’t for her the place wouldn’t look the way it does. She does a lot of it…actually I help her.”

Diane’s creativity in the ladies room. Photo by Cheryl, of course

I spoke with said sister Diane Dinicola. She teaches First Grade at the Park Ave. Elementary School in Westbury. She doesn’t have an art background but loves art and loves decorating so she enjoys expressing her creativity at the cafe. She’s invested in the cafe monetarily…and with her heart. She likes to write too. She wrote a children’s book, “The Perfect Pair”. She said Carol’s daughter Sara produced the artwork in the book. “The Perfect Pair” is available at Amazon: http://tinyurl.com/Perfect-Pr

When I asked about Jeff’s being presented with late afternoon decor chores she said that at first he did find it to be a lot of work, especially hanging those frames from the ceiling, but now it’s grown on him and he looks forward to it. I said,  “So, it sounds like you lit a creative fire under him.” She said, “That’s it, yes.”

So I see the confluence of family creativity here, the serendipity of human beings coming together to produce art: constructive, gastronomic, visual and even literate. All expressing themselves in bursts of creative passion.

Recently, at Long Beach’s Gentle Brew Coffee Brewers on the boardwalk I chatted with Richard Weinstein of Petrey Real Estate. He got creative with his cover of Sinatra’s “New York, New York” in a video he made. He did a very good job of it too.  I told him he reminded me a bit of Leonard Cohen in the video…but maybe only from the hat brim up:https://youtu.be/tJ9DwfVzFl0