His Desk…White Sand and Ocean Waves

A Timeless question: To work at one’s passion? To work for the most money?

From my earliest memory I always wanted to become a detective. So when I completed  my career as a NYC Transit Police Detective I left a job I was happy with.

But I see men and women who make their choices…and it shows. You know how they feel about their work.

Choose a career for money and you might gain a lot of possessions, in unhappy work.

Choose what you love and excel at it and you will likely be appreciated, maybe even be well compensated. But you will always be happy in your work 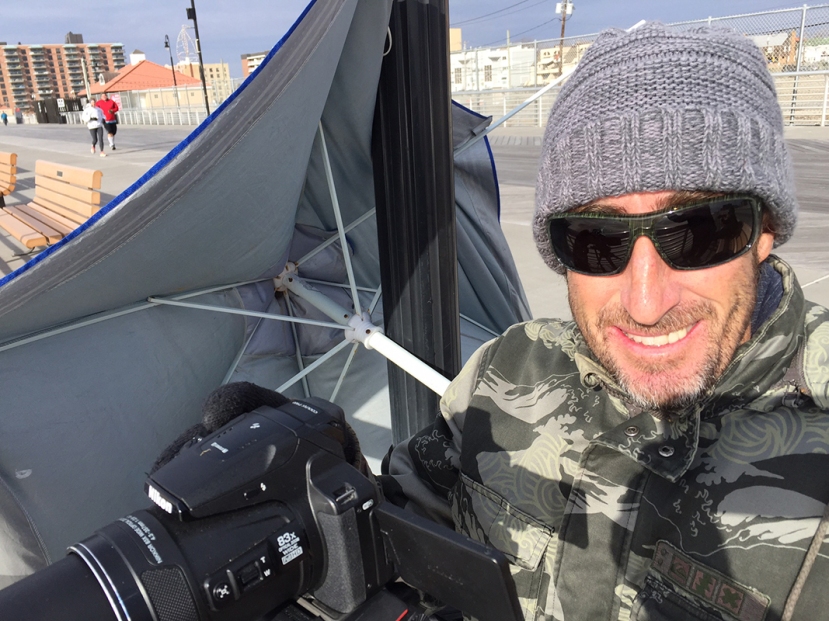 When we are about to walk Bailey or ride a bike we check the weather. If it’s  43˚ we’ve learned that it’s 43 Long Beach degrees, which does change things considerably…for the colder.

I went out to hit the boardwalk one day this week. It was way too windy to bike ride. In the past I’d be peddling against the oncoming wind on our 2.2 mile boardwalk and I’d be overtaken and passed…by joggers.

It was 36˚ this day, with a wind chill of 26˚. As I walked west into the 18 mph wind there were hardly any other walkers and no bikers. But then up ahead I saw an umbrella rigged as a windbreak next to one of the railing benches. I went over to inquire within.

I found two guys and a bloke, the latter, from Australia, all in the lee of the umbrella, armed with long lens cameras. They were surfers, two of them surfing instructors of nearby “Hurley Surf Club powered by Skudin Surf.”

When I asked, “What’s up?” They said they were part of the Winter Warrior program observing the surfing students in the sea before them.

The youngest observer was Jack Richards, a fourteen-year-old Long Beach High School student who has been surfing since he was nine. He had a nice camera at the ready; he said he likes to take pictures as well as surf. Jack has yet to choose a career but his companions quickly offered one for him, “Pro surfing!”

In my police career, I’ve observed that our young have a much better chance of fording the dangerous currents of teen years if they have wholesome interests in their lives, like fishing with dad. In Jack’s case, getting into the surfing scene early was an excellent move. 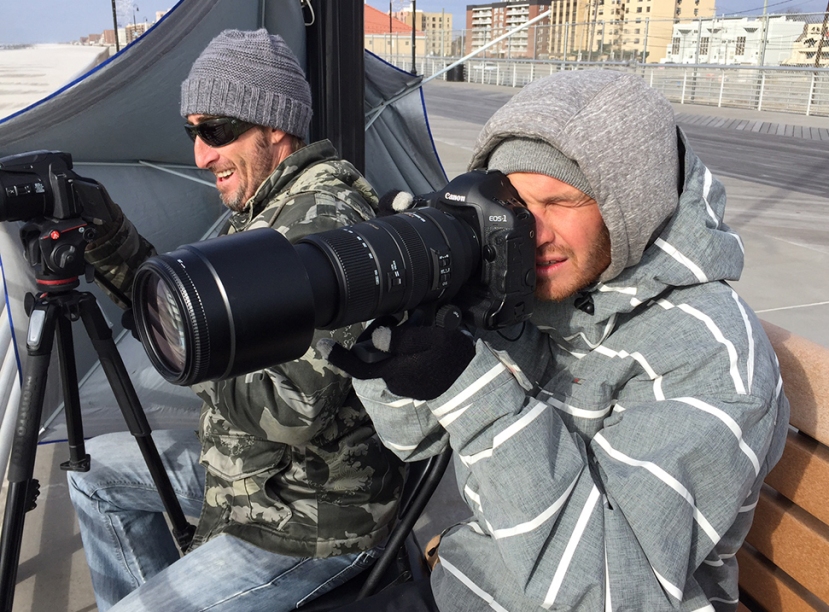 Adam Dufner and Chris Hamlet…happy in their work.

Next to Jack was Chris Hamlet, a Service Coordinator at Hurley/Skudin. Chris told me about their Winter Warrior program. He said Skudin instructors teach students winter surfing and right now they had advanced beginners in the sea. The Winter Warrior program is a seven week course that starts in Oct but due to bad weather and the holidays they are only finishing now.

The water temp was 43º but Chris said today’s five mil wet suits work just fine for winter surfing. He said some surfers use Vaseline on their exposed skin but even without it it’s okay. He said, “Sometimes when you come out, it’s hard to open your car door, your hands are so stiff.” I asked if there were increased risk of future arthritis due to the repeated exposure to cold water, he said there was not. Chris seemed eager to explain every facet of his profession, a listener could feel his enthusiasm.

When I asked how safe it is to surf in winter, drownings in rough seas for example, he said they never had any occurrences like that. There are always instructors nearby.

Surfboard leashes keep the board tethered, this surfer was leashless

When we spoke about the reliability of the leashes, (tethers) on the board, Chris said the leashes attach with velcro and rarely break away but it can happen. When it does the surfer swims in to shore and not after his loose board. They recommend always to surf with a buddy. The buddy system, Chris said, always provides someone nearby to help if needed. All Hurley/Skuddin instructors are lifeguards and CPR certified, added Chris.

Adam Dufner, the Australian, is the most experienced of the trio. He said,”I’ve got a full time job with Hurley High Performance Center in Australia.” He trains surfers for a living and has lived in NY for seven years. He has a daughter here in Long Beach, but goes back down to the down under every year. He said the seasons work well for him, when it’s high surfing season there it’s low season here. He said he’s usually back in Australia by now but will be leaving soon. Sounds like a marvelous match, Mate.

Adam Dufner, in the lee of the Long Beach winds

Adam spoke well of Long Beach, NY’s surfing. He said, “Lincoln and Monroe beaches are popular but the banks (underwater banks of sand) change from time to time so you have to move around and keep where the best waves are breaking. You can get some of the best beach-break waves around when they come.”

Adam said, “People don’t understand that in Sept and Oct, and over the winter months, Long Island gets world class waves.” The fall is when Long Beach often has surfing competitions.

Adam said the contest organizers choose a two week period in Sept in which entrants must be present. Then, sometime, even with as little as a 24 hours notice, the four or five day span of the contest is announced. The proximity of hurricanes out in the North Atlantic help determine the days and the likelihood of great waves. Adam said, “Hurricane swells here are as good as it gets anywhere.” 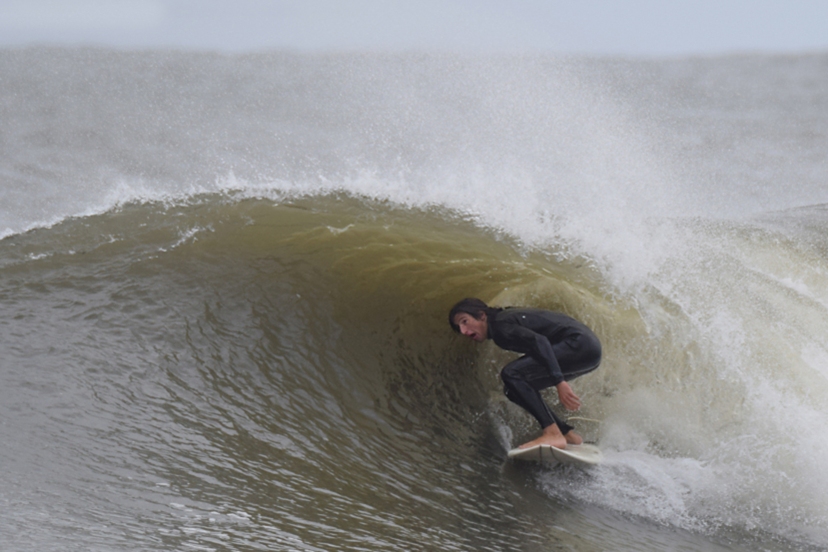 Adam loves his choice of career. He said in his crisp Aussie accent, “You find something that you’re passionate about, that you love, and it’s not even work.” About his personal career passion he said, “You get to travel the world doing something you love and meeting these amazing people. I love working with kids all over the world.

Adam Dufner…another day at the office.

Adam feels he’s much happier at the edge of the ocean doing what he loves than he would be in a cubicle somewhere pounding the keys of a computer and looking at the clock. His clock is the rising and falling sun, his desk…white sand…ocean waves.

So there we were on this wind whipped boardwalk, this ancient photog with his career long behind him looking at three stages of profession and adventure,

Adam, in a glide path of blissful international teaching; Chris, soaring in his own surfing instruction career and young Jack with many many miles to go before he sleeps, paraphrasing Robert Frost. Frost, who else to quote on this winter’s day blog post, by Lee Winters. 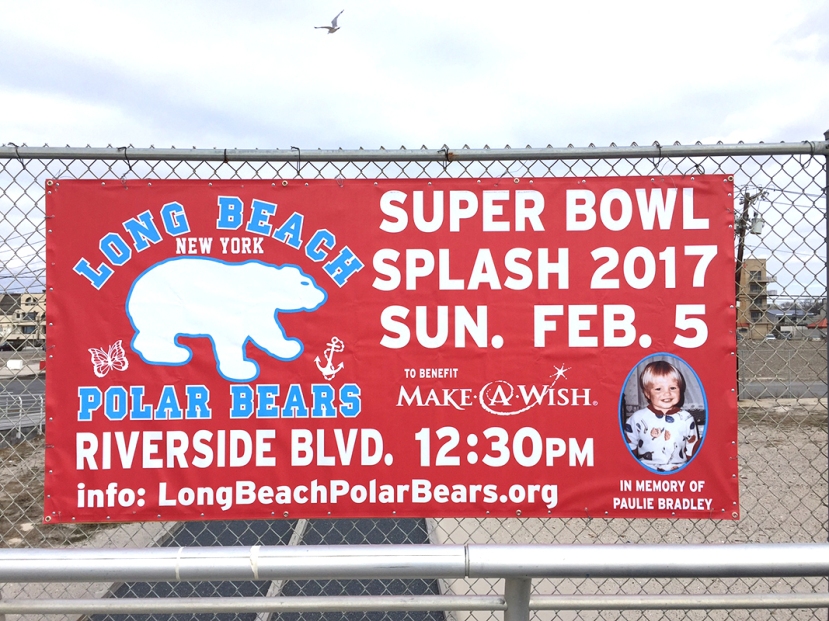