It’s hard to really tell who’s the lion, who’s the lamb, but these two creatures sleep, walk, play, and just—be together.

I’m told by Maureen, it all started about eight years ago with a cat that had been living under the solar panels on the house next to her Long Beach home. Maureen spoke of how she saw the creature from her window crawling in the snow to get under the panels. A lady neighbor began feeding the feral cat—then, the lady moved.

One day Maureen came home to find her dog, Seamus, a Goldendoodle, sleeping with the cat in her yard. After repeated sightings in her yard and on her deck, she took action.

She allowed the cat entry to her home, where it initially would only scurry under her bed.

A lover of helpless creatures, Maureen was amazed at the happy turn of events. She wanted to name the new pet but didn’t know if the cat was male or female—so she called it Jenner, for Bruce (Caitlyn) Jenner.

Slowly Jenner ventured out from beneath the bed. And eventually, it began to interact with visitors, even leaping upon their laps.

Maureen, Seamus, and Jenner took walks together. But tragically, Seamus, chasing a squirrel, got hit by a car and had to be put down.

Maureen went without a dog for a year and a half, then got Fiona, a labradoodle. Maureen says she doesn’t take any dashing-squirrel chances with Fiona.

Maureen got Fiona when she was a puppy, only 3 months old and 18 lbs. It only took a week for Fiona to take up the role that Seamus had in the pack. It worked just purrfectly. Sorry, couldn’t resist the news-anchor pun.

Fiona and Jenner orbit each other as if in their own solar system. And after watching them over these days—I think they are in their own universe. A place, and a peace of mind, I’d like to be in.

I came upon the crew on multiple days while we walked our own pooch, Scout. Maureen was more than willing to tell, and I was eager to hear—the tale of the tails.

Maureen makes sure they are fed the same time daily, so there is no need to find sustenance elsewhere. When the pair are on the deck of Maureen’s home, they lie together and watch the birds eating the bread she tosses. There’s nary a bark from Fiona nor a hurtle from Jenner. They are simply—there. 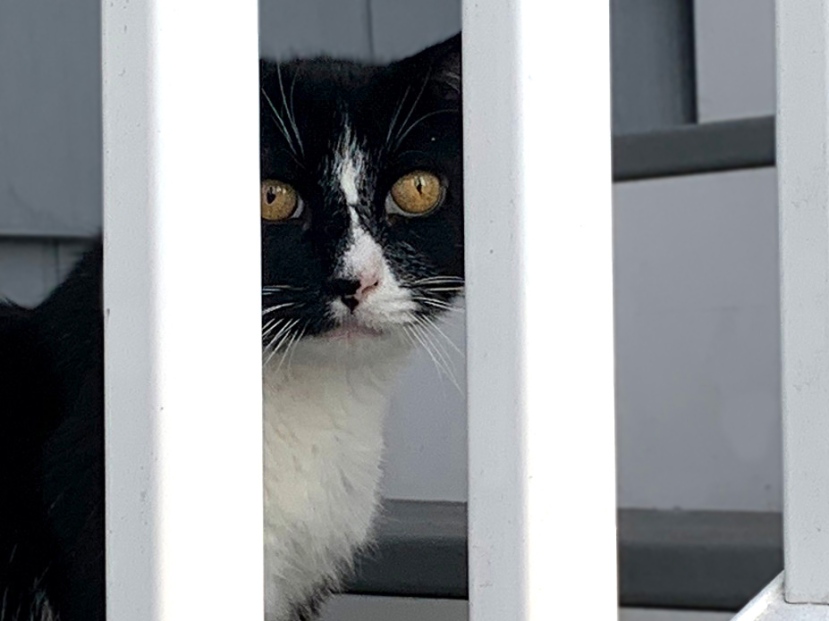 This pack walks together on the streets of Long Beach, just like the old pack.

Sometimes Jenner lags behind on the walks so Fiona and Maureen often wait for her to catch up.

Sometimes too, Jenner, not limited to sidewalks and streets, takes side trips from the walk. She goes down driveways, across back yards, then catches up later with the crew. Or she just might keep going and take a shortcut home. 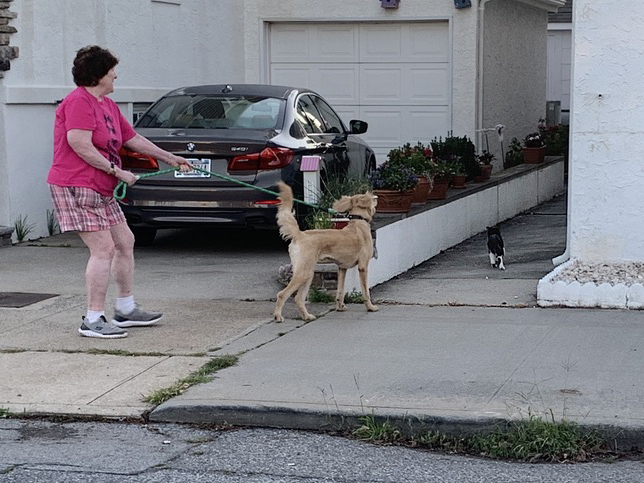 Once in awhile, Maureen walks about a mile west, and pooch Fiona happily obliges. This long journey doesn’t suit Jenner, so she just heads back home.

And it’s home where the pack is most at ease.

It’s here that I saw so much affection between the furry friends—and so much love from Maureen. Maureen, this embracer of feral cats, this feeder of birds, this steward of canine/feline syncing—is what we need more of in this most troubled world. 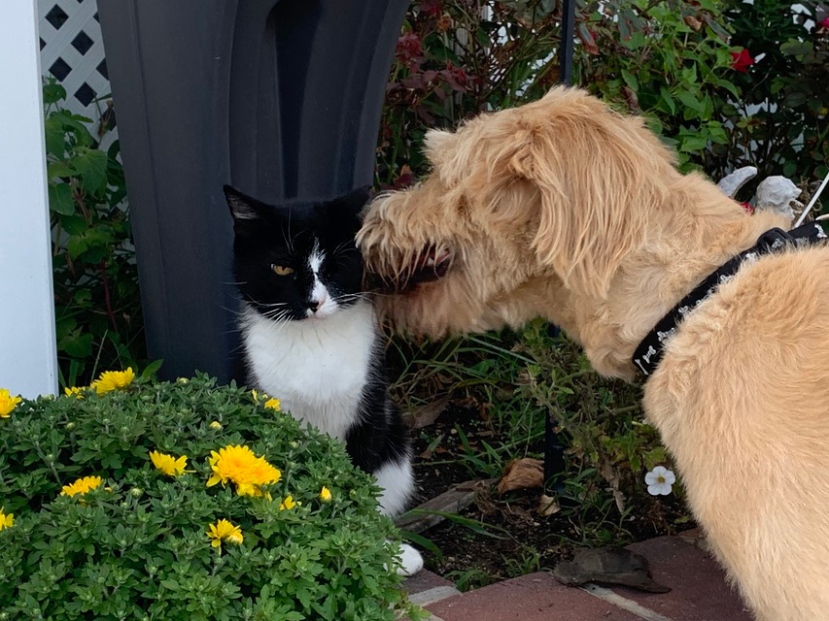 I understood that it was Seamus, years ago, who adopted Jenner. That may be true, but I think it was Jenner who was the adopter in this new pairing. I suspect she found so much harmony with her rescuer, Seamus, that she called on lionhearted courage for this second chance. A chance to partner up with another creature so different, so much bigger, so much louder than she. So Seamus, now perhaps romping with Angeldoodles, was the real spirit of this symbiosis of hearts.

Jenner and Fiona experience the joy we “higher” species have so much difficulty achieving.

What we have here are different creatures on this tiny blue planet—just getting along, just being in the moment. No concern about their different colored coats. No thoughts about whose life matters more. No—animus—for each other.