“Often the truth is in front of your face, but your eyes and heart are so full of lies that you can’t see it.” Shannon Alder

Sunday morning at Long Beach, NY was a super summery experience. The sun at 8:00 a.m. felt like noon. But the morning strollers, some with drinks in tow, took it all, well…in stride:

But there was a bit of a happy surprise on the horizon, the dredge was back: 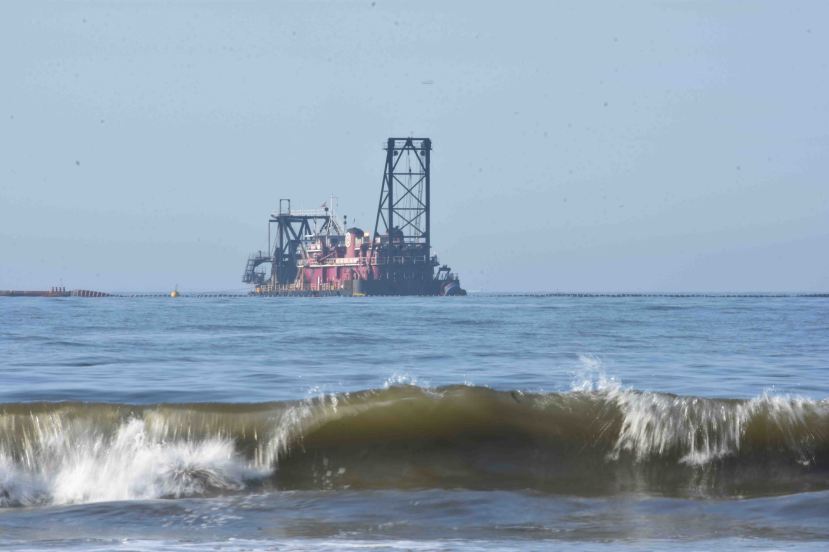 As reported in my previous blog, “And Pumping it Down,” the dredge, Illinois was at the yards for repair. I reported it would be back the end of the week and…there it was.

So, Monday morning I took a bike ride down to the West End of Long Beach to see what was up, or down.

First, I came upon the Crab’s tip rising over a West End dune.

I climbed that overpass and saw that the slurry was pumping a few blocks down by Indiana Ave beach. So I biked on down.

As I said, beach restoration with seabed slurry had basically come to halt due to the part failure on the dredge. But now, at the Indiana Ave. beach renewal material flowed from the spring of sand.

The slurry was pumping silver from the 30″ piping, Yes, it looked a lot lighter in tone than last week’s slurry, maybe a closer dredge to shore this time?

Silvery slurry, up from the deep

But I was mainly there to see the Crab in action. At 8:15 the Crab was still where I saw it a few blocks east of Indiana, but I could see even from here that it was manned and being prepared for its daily adventure. 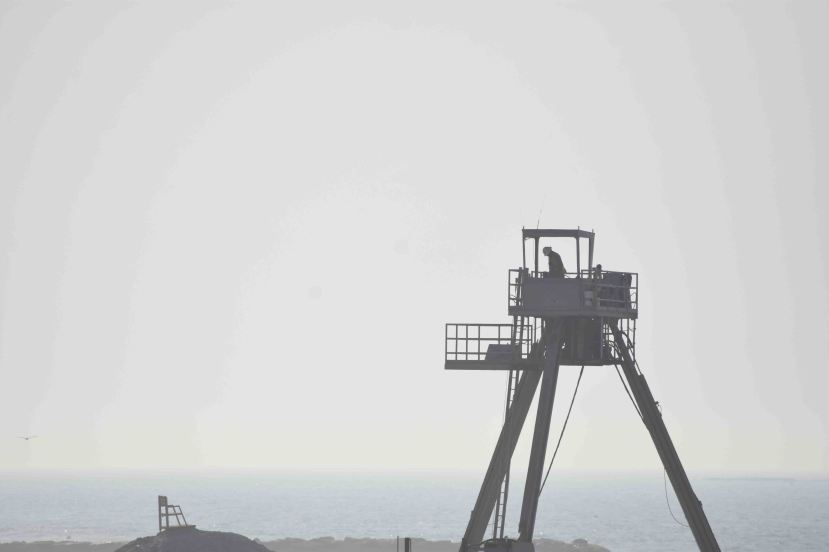 We’ve all had our Monday workstations to face: foxholes, offices, desks, cubicles, work benches, lecterns, subway platforms. But being at the top of a triangle rolling into the sea has got to be among the best. 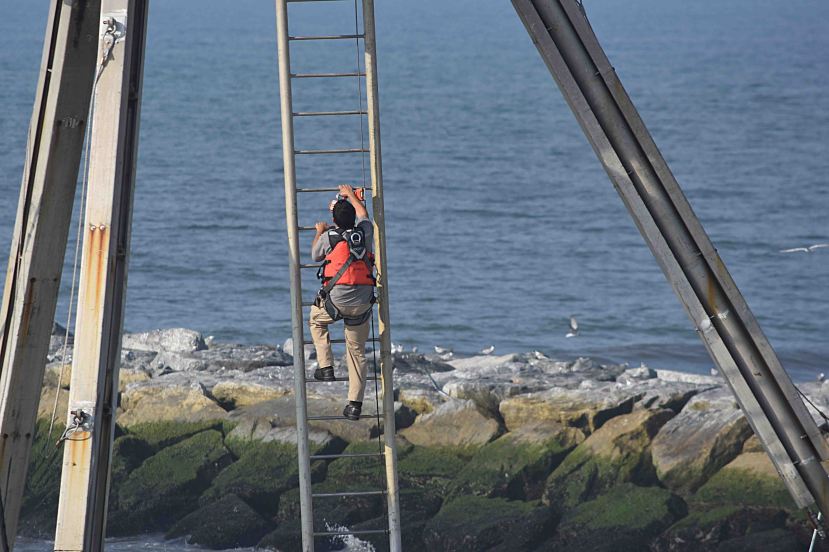 Slowly the Crab sidled along the shore, dipping in to take measurements, then pivoting like a politician before climbing out of the sea. The Crab’s A-frame reminded me of my A-train job policing the NY subways. But this sure wasn’t like the A train pulling into Chambers St on an August day. I’m thinking the scent of salty air was a bit less pungent atop this rig. 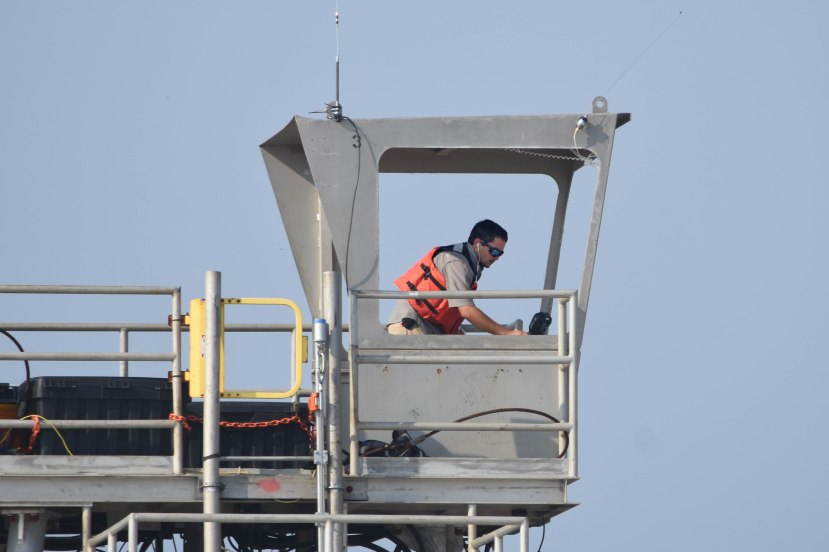 The Crab operator, at his “cubicle”

Now, it looks like pure fun, but I’m sure it’s dangerous too because anytime flesh and steel come together…there is danger.  But, it would still be on the top of my list for jobs on summer Monday mornings:

…I became aware of a wonderful visiting couple nearby. They were from the Chesapeake Bay area and were staying with family on Indiana Ave. So, I had a nice chat with them.

I explained that the work done here was, in my eyes, only a Band-Aid to deal with the local and immediate threat from storm surges. I said that I thought that climate change was the bigger picture that really had to be dealt with to curb rising sea levels.

They said there was very real evidence of rising sea levels in the Chesapeake Bay. I was already aware that Maryland is second in states having cities prone to flooding, only behind Louisiana.

We spoke about the need to reduce carbon in our environment but how humankind continues to put economics first. The couple expressed the thought that maybe both things could be accomplished, a healthy economy and a healthy and sustainable Earth atmosphere. I emphatically agreed.

I said, yes, two environmental works can be done at the same time. But maybe it would take some pretty strong exceptionalism to get that job done. Is there a nation with such a capacity for exceptionalism to lead the world in that endeavor?

I gave this fine couple an example of our Oystercatcher nest atop a sand pile in the midst of shore renovation this spring as an icon of such coaction. 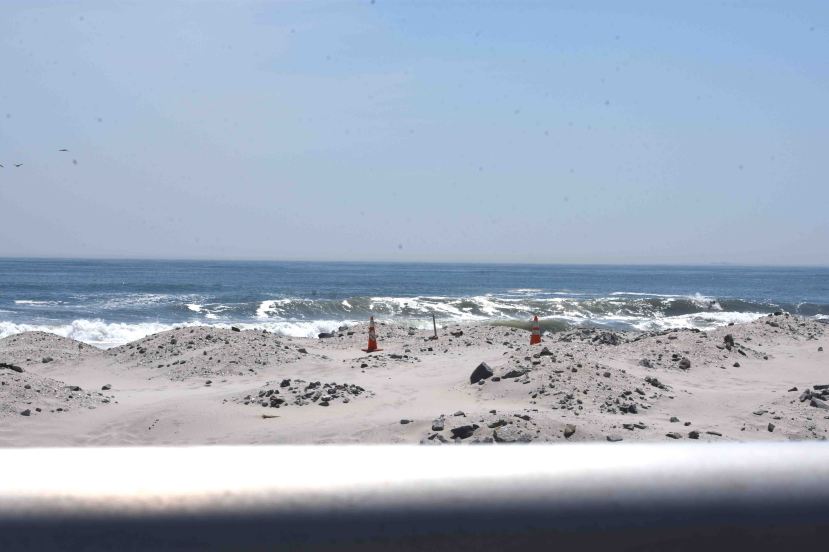 I related to the couple that according to this new Dept of Interior’s interpretation of the Migratory Bird Act, this hilltop nest could be destroyed for the sake of the shore restoration project.  But, I told of how, through the efforts of the Facebook Oystercatcher Chronicles, https://tinyurl.com/OC-Chrn and Long Beach government the nest destruction was stayed. That effort caused the NYS Dept of Environmental Conservation and the U.S. Army Corps of Engineers to respond that the nest pile would stay undisturbed while the renovation work was done. Coaction on display. See Boardwalk Eyes: https://tinyurl.com/bdwkS-eyes

I got a hi-five for Long Beach from the couple on that news.

We went on  to speak of the Sunday NY Times Magazine this past weekend which devoted the entire issue to Climate Change, with a stark black cover stating even more starkly:

THIRTY YEARS AGO, WE COULD HAVE SAVED THE PLANET

I’ve been doing all I can to support the overwhelming majority of scientists who agree that climate change is real and man has a part in it, to propagate this message: on my humble blog, on social media…in my vote.

The link to the NY Times piece is here if my blog followers would like to read or scan it. I recommend at least reading the epilogue:https://tinyurl.com/NYT-clmtchang

As I looked at the incredible earth moving technology on this Long Beach shore, I couldn’t help but think of how badly we need a more Earth-saving will on our globe.

Here we can muster the power to pull sand from the deep like a straw pulls sugar from the bottom of a summer iced tea. We can pull that sand up to this West End beach, from the seabed to the shore, in sixteen minutes.

Most of us see the perils of our course, others have challenged “see levels.”

We may indeed be in a second Dark Age. An age of intentional blindness.

As James Michener, author of Chesapeake said, “An age is called Dark not because the light fails to shine, but because people refuse to see it.”