The Egg and I

In these most troubled times of the deaths of my Brothers in Dallas my heart aches.

Their loved ones are inconsolable, lost in numbing grief. The sounds of Taps, the pipes and drums, the lowered flags will not ease their agony. And my heart is with them.

But I must look to the sun, the sand, the blue sky, the free America they served and protected for me and for you. Every time a lawman dies, a soldier dies, a protector dies, he dies for you. Remember them…as you take in the life…they no longer can share with you.

I’ve been sorely tempted to interfere with nature…it’s about the egg and I.

I rode my bike west, sucking in the sea air as I did, along the Long Beach boardwalk. I rode to the oystercatcher’s nest of lifelessness. As I approached I saw one oystercatcher sitting about a hundred yards east of the cordoned off west-nest area. I had hoped that a new nest was starting…and maybe it is.

A bit further west It looks like they are ready to abandon the long sat eggs, only one egg remains. The oystercatcher mom laid the eggs in April but as most of you know, a rogue spring tide over-washed the nest: http://tinyurl.com/jqrxuef

…while oystercatcher mate sits on non-viable egg in the west.

The egg gestation period is 28 days for oystercatcher eggs to hatch, this nest was sat for three months now. Life begets life, that’s all this mom knew. She was relentless in her duty. Nest watchers have been saddened by the hopeless perseverance in the summer heat.

Mom was sitting on the remaining egg when I first passed by this morning but on my return she was about a hundred yards further east with her loyal mate who seemed to be staking out a new nest site. She later joined him at the surf’s edge.

The orange coned area was empty now and stayed that way for the half hour I was there.

The West nest was unattended for at least a half hour.

I stared long and hard at the inert egg…life not to be. 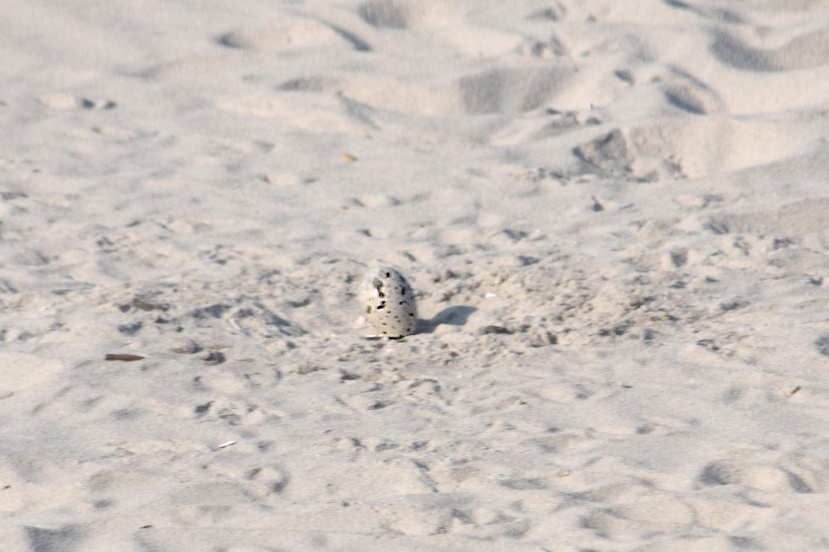 I was tempted to go down to the “nest” and take the cones down. I wanted to remove the dormant egg and bury it under the boardwalk where I had interred a gull-killed chick last year: http://tinyurl.com/zesg97n

Impulse is often error. What I would have done, despite my good intention would be against the law, tampering with an endangered species’ nest. I would also likely have to deal with onlookers who didn’t know “the tide story”. So, as is often the best way, I decided to continue to let nature take its course. Let the egg disintegrate in the summer sun. Let the oystercatchers surrender to the grief.

This is Surf Week at Long Beach NY, the City by the Sea. But the surf didn’t get the invite…or so it appears today. The surf was down but the week is young.

Surf boards in search of surf

Surf Week runs from Wed, today, till Sunday, the 17th of July. Here are the details: http://tinyurl.com/h25nx4x

The boardwalk was abuzz with the get-ready, it’s always clean and fine lookin’ but we like to put a sparkle on the city on these special days.

Maintenance worker, Ryan Donnelly, powers his way through the day.

And kudos to the City Manager, Jack Schnirman and crews for all they do.

There is nothing like a cool morning ride by the sea, watching the surf, the clouds, the ospreys, the maintenance workers, the lifeguards. 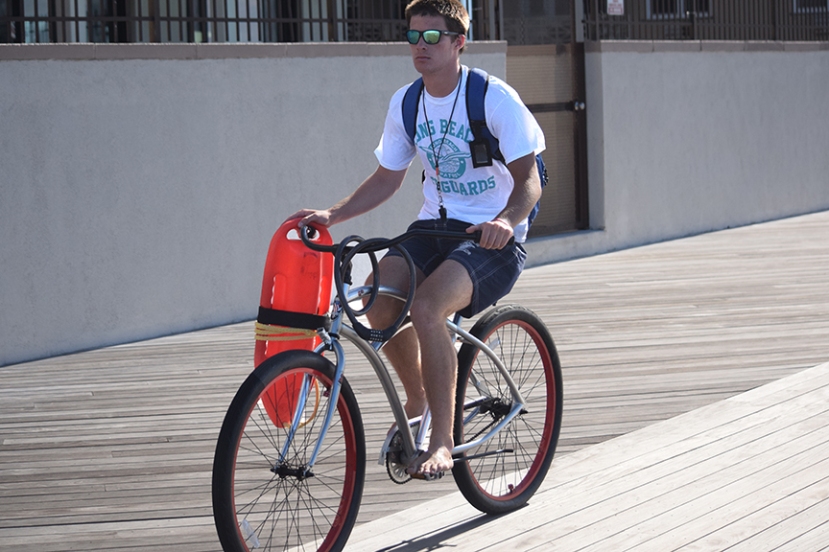 Lifeguard teen on his daily grind

This lad will someday look at his teen years’ commute with great nostalgia. Those were the days, he’ll no doubt think. Perhaps…as I do now. May he be safe in this American life so many have guarded for him.

I am thousands of miles from the Taps and the pipes and the drums. But I hear them in my heart. I know that the free salt air I breath, is the gift of God…and our protectors.