I went to a young Police Officer’s funeral today. And as I stood there in the spring sunshine with thousands of others, a question burned in my heart.

What are you carrying America?

Once again we hear words of “shocked and appalled.” Once again Law Enforcers gather from the far reaches of America and beyond to honor a fallen Brother. Once again the mournful pipes hopelessly try to express the sorrow of shattered family hearts.

A Brother is gone from us. Police Officer, Brian Moore, who tried to stop an armed urban predator was torn from us. A predator who knew no boundaries, who never yielded to society’s sanctions, who never respected civility.

This predator had an advantage now that he never enjoyed before. He was running loose in an urban plain that curbed his hunters. A policy of restriction that perhaps caused Brian to take a low-key approach to danger.

My fellow Americans, was Demitrius, the predator looking for you coming home from work on that fateful spring evening? Was he looking for your son or daughter when he encountered that brave lion, Brian?

This is the question dear fellow citizen of the American plain. This is a question I ask the civilized among 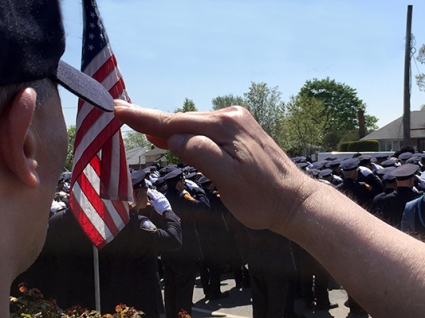 you. It’s the same question this brave Brian asked with his very last words, “What are you carrying?”