“Patrolman Leander Brower of the 109 Pct., Long Island City, was arrested at noon today for a holdup…”

I’ve been spelunking the news pages of the ages and found fascinating items, both personal and general. You might want to dive into these caverns of ink too.

A recent email from a sib of mine caused me to plumb the depths of my personal history. I was at times amused, then even amazed at what I had found. 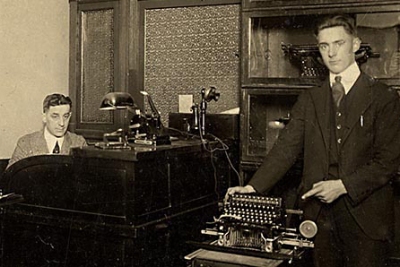 When Underwood was Apple: http://tinyurl.com/typesales  My dad 16, right, typewriter sales and service, 1921

My sister, Mary, is the historical custodian of things, “Winters.” She constructed a family tree for our ancestry years ago and all family members have a printout of our family’s, “Moving to America.” For those interested in a genealogical search she thinks the Church of Latter Day Saints to be of significant help *

But when she sent me a link to a 1918 Brooklyn Eagle page that had a story about a cop who held up a saloon, I was intrigued. (No, it was not my dad.) Yes, the story of the off duty cop threatening to “perforate” the victim was vivid, but so were the adjoining stories of Hotel Held up by Human Arsenal, and the Rainbow Division’s never having lost a battle in WWI, and turkeys 46-54 cents a lb, (very high, no doubt due to the war). And my favorite ad, Munyon’s (alternating) cold and grippe remedies. Bottom left of page:http://tinyurl.com/1918robbery

1924, My dad’s application for marriage lic.

The Brooklyn Eagle published from 1841 to 1955, ran local, national and world news but also a lot of the minor stories of the day. I found the 1924 listing of my dad’s application for a marriage license. You can see, at left, LeRoy Winters and Grace Lenahan and their ages, both twenty one. I only knew vaguely of Grace but this entry made her come alive to me. I could feel the elation at their “setting the date.”

Too sadly Grace died as a complication of child birth just a couple of years later.  My dad found himself being a young widower with a daughter. He later married my mom and had six more kids, me the semi-motley member of an otherwise comely crew.

Another personal discovery was evidence of one of my Uncle’s having been a teacher in a Brooklyn elementary school. As Johnny Carson would say, “I did not know that.” 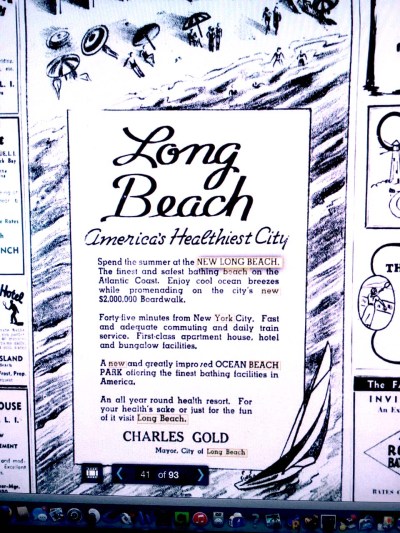 I love this stuff and I suspect I’m not alone as an ardent historiphile. This wonderful newspaper covered coast to coast so I’m sure there could be some local things of interest to many of you.

I realize that much of this discovery of mine is “old news”, so to speak, to many of you experienced researchers. But for some out there, it’s a pretty cool alternative to some of the surfing being done on company time. FYI: did you know sex “outside of marriage is the cause of the most damning mental maladjustments.” And that “sex desires can be directed into wholesome channels, such as athletics, hard work, hobbies…”:http://tinyurl.com/Knwself

To dive into history’s typographic caverns all you need to do, of course, is type into the search bar the name of the person or subject you’re interested in learning about**

The term searched comes up highlighted on the page. But you need to scan the page to get the real “feel” the times. That’s where the vein of “gold” runs throughout these inky caverns of type.

The earliest cave drawings that we consider art, could be seen as the first news reports, the “Breaking News” of the day:http://tinyurl.com/inlocalnews

The further I went back the more I was engrossed by the quaint explanations and terms: Someone was examined by the “insanity commissioners” due to his unusual behavior, or the shooting involving a couple who were “fond of social pleasures” (apparent bar hoppers in today’s terms) in a fascinating story. The group from where the shot was fired said, “We only (fired the gun) to enliven the neighborhood, to let people know we were having a good time.” from 1890:http://tinyurl.com/HPOliver

There was much local Long Beach, NY info, like the new LIRR station built in 1909 for $40,000:http://tinyurl.com/LongBeachSta

Or the “racket” of charging 50 cents to enter the sands of Long Beach:http://tinyurl.com/LongBeachracket

I didn’t know that in 1902 the Long Beach Transportation Company began it’s ferry service from Bay Shore, Islip, and Babylon to the ocean resorts of Fire Island:http://tinyurl.com/IsliptoLBferry

In national news, you get the feel of the times two days before President Lincoln was assassinated:http://tinyurl.com/preassin

And when John Wilkes Booth’s brother, “Brutus” was arrested and a piece on Andrew Johnson’s poisoning:http://tinyurl.com/Wilkesbrotherarrested

You might want to be the family researcher or historian and discover stories long forgotten or never known.

You can even attach your own photos of homes of long gone ancestors. Go to Google Earth and use street view to locate the subject house. You can manipulate the camera to get a front view, then copy and paste it. As I’ve done:http://GoogleEarth.com

When I go back into time through the day’s news stories it’s not at all like reading the tired tomes of history. It’s like I’m right there in that moment, the day after the event. I’m sitting on the Davenport in my parlor,  the Brooklyn Eagle spread out in my hands. Maybe even with some alternating Munyon’s to ward off both Spanish Flu and the grippe. Oh yeah.

**To search the Bklyn Eagle:http://bklyn.newspapers.com/