Getting High on Sky

“That’s a misconception, Lennie. The sky is everywhere, it begins at your feet.”  Jandy Nelson, The Sky is Everywhere

The sky does indeed begin at your feet when you: “… squiggle sandy toes on sunny shores, taste salt air…and know home again…” 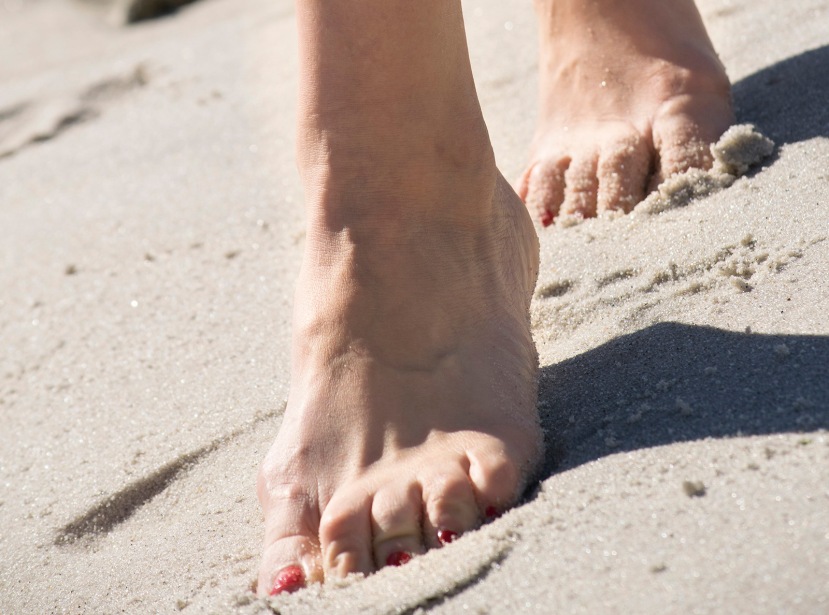 Because life is of sky.

We seem to be always looking for new landscapes, new adventures, new excitements, we hominids. And too often we try to gain them on the cheap through ingesting or injecting or vacuuming happy dust up our olfactory canals..at our increasing peril.

More Americans died of overdoses last year than the total who died in all the years of the Vietnam war.

That’s right, 58, 220 Americans died in service for the country they loved and 64,000 died in only last year of overdoses.

We might think all who overdosed were volunteers but many, if not conscripted…were prescripted. As you have recently been made aware, pharmaceutical companies, their lobbyists and Congress have been part of the increased availability of opioids.

On top of the death rate people are losing their futures through arrests for drugs. Last year, here on Long Island, there was a 30% increase in the number of drug arrests over the past ten year period.

We are promised renewed action by our president to fight this peril. But what is the real situation that causes so many of us to fall for narco-highs? Is it mere availability?

My clicking on this plastic keyboard can’t express the situation more clearly than what so many Americans tell us every day…through their actions. All we have to do is read what they express.

For too many Americans, and humankind, it all begins with a wanting, a need, to be anywhere but here. Anywhere but in unadulterated reality. Just look around and read America.

We speed in our cars, we distract ourselves driving, we drive drunk or stoned to escape the reality of just…being.

Some of us have been chewed by life more than others so we seek liberation from reality in packaged pearly gates: Apache, China Girl, China White, Dance Fever, Friend, Goodfella, Jackpot, Murder 8, TNT, and Tango and Cash.

Some of us weren’t hurt so much by life, we just want instant excitement or the narco- nirvana of “dreamless well being”

But being with this big blue room of life is the most splendid high. Ya just gotta get hooked on it. Ya just need to slow down and try it…once in a while.

To feel a baby’s fingers wrapped around yours, to inhale the scent of its hair, to squiggle sandy toes in sunny shores, taste salt air…and know home again.

To lay back and see the scattered diamond portal of two trillion galaxies on black velvet, then touch gently and love tenderly…another human being…right next to you.

I do in fact go out on our terrace at two in the morning or so, lay down on the chaise lounge and just watch the sky. Watch the sparkles in space, the space no doubt containing other beings perhaps looking back at our star or…me. 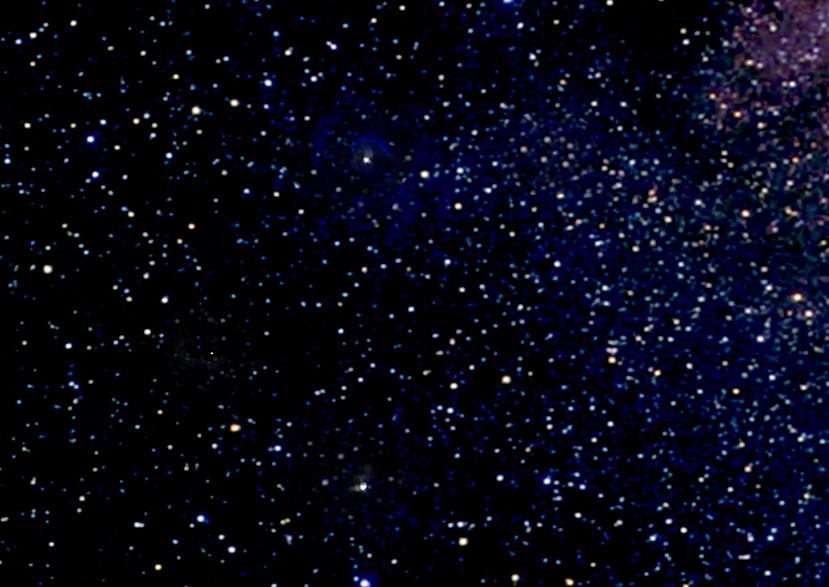 All of what you and I see this way is raw, all uncut by fillers and filters, with all our senses as receptive as the day this blue planet welcomed us.

But our minds with all the stories, the past, the regrets, the future, the anxieties, all act to block us from just being with life. It’s not a matter of “just saying no”, it’s not about resistance, it’s about engagement, engaging the yes of life.

Embracing its unfolding right at our feet.

Maybe, if there were more emphasis on yes, on seeing, on experiencing life for these natural highs; maybe if we had more emphasis being with life in schools, in media, at home, it might make a difference.

Maybe, if we can just surrender to being, be with a bird on a beach, a grain of sand…

…clouds sailing the skies, like sailboats on blue seas.

Maybe we can consider a vacation from our mind stuff, the siren call of constant distraction, if only for a short respite.

Maybe turn off the “smart” phone, just once in a while and walk your street mindfully. Take in what you otherwise would otherwise just pass by.

All of this, it’s all of sky. We are in fact, Earth and everything on it…in the sky. Just look around and experience what’s here with you.

Some of us go well out of our way to “walk” the Earth. Just this past week off Long Beach, this paddle boarding lady amidst the dolphins: 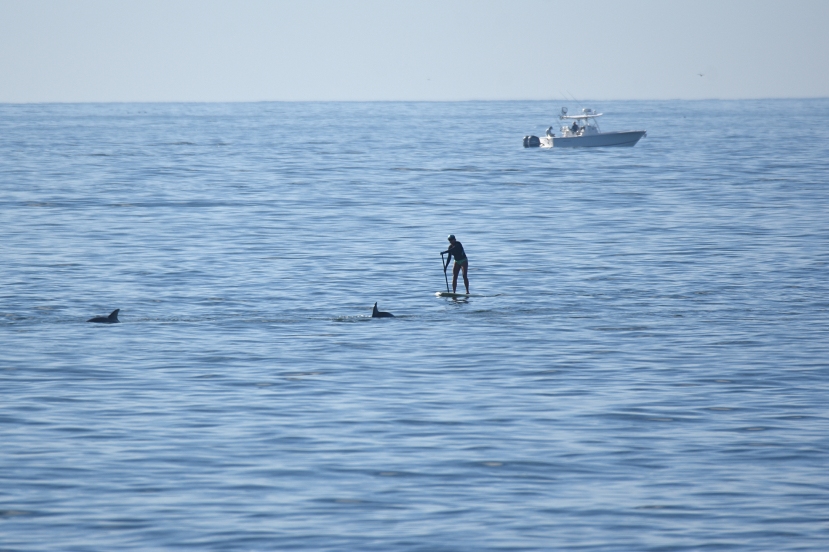 But for you and me, maybe just turn off the car radio while at the stop light and watch the bus stops where Moms, Dads, Grandparents usher their lifeblood aboard the yellow hope machines.

I recently saw a mom and two kids waiting for a school bus. She was smiling as she spoke and turned the pages of a large children’s book. I shot the scene, not with my phone but with the lens of my eye, the sensor of my retina, the memory card of my mind.

But I didn’t add a mind-story of random thoughts as we often do: “Wish my mom had read to me,” “I should have read more to my kids,” “Where did I go wrong?” “I’m glad mine turned out well,”or…”If only I had kids.”

I just took in that moment. I was present with those fellow sky-walkers at this intersection in Long Beach, New York…on the sand-grain, Earth…amongst the trillions of stars.

The next day I approached the lady; she still had the book when I explained how I sat at that light and saw her reading to the children the previous day.  I explained this blog post about being in the moment and asked if I could take photos. “Sure,” she said, telling me the boy with the hood next to her was her son, she accompanied the other lad for a neighbor. I said, “I didn’t take photos yesterday, can’t take photos and be in the moment too.” She smiled and said, “Yes, that’s true.” 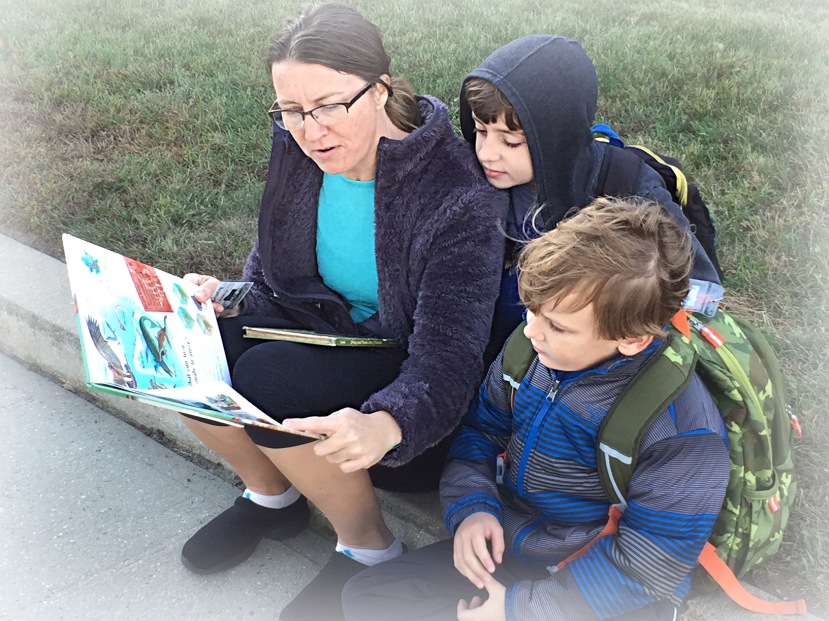 So may I suggest that instead of injecting, ingesting, snorting, texting-while-driving or tearing through life mindlessly, consider this: Maybe visit just once in a while, a pure undiluted moment of being. Visit a moment that so many in service to us would savor, had they but survived. 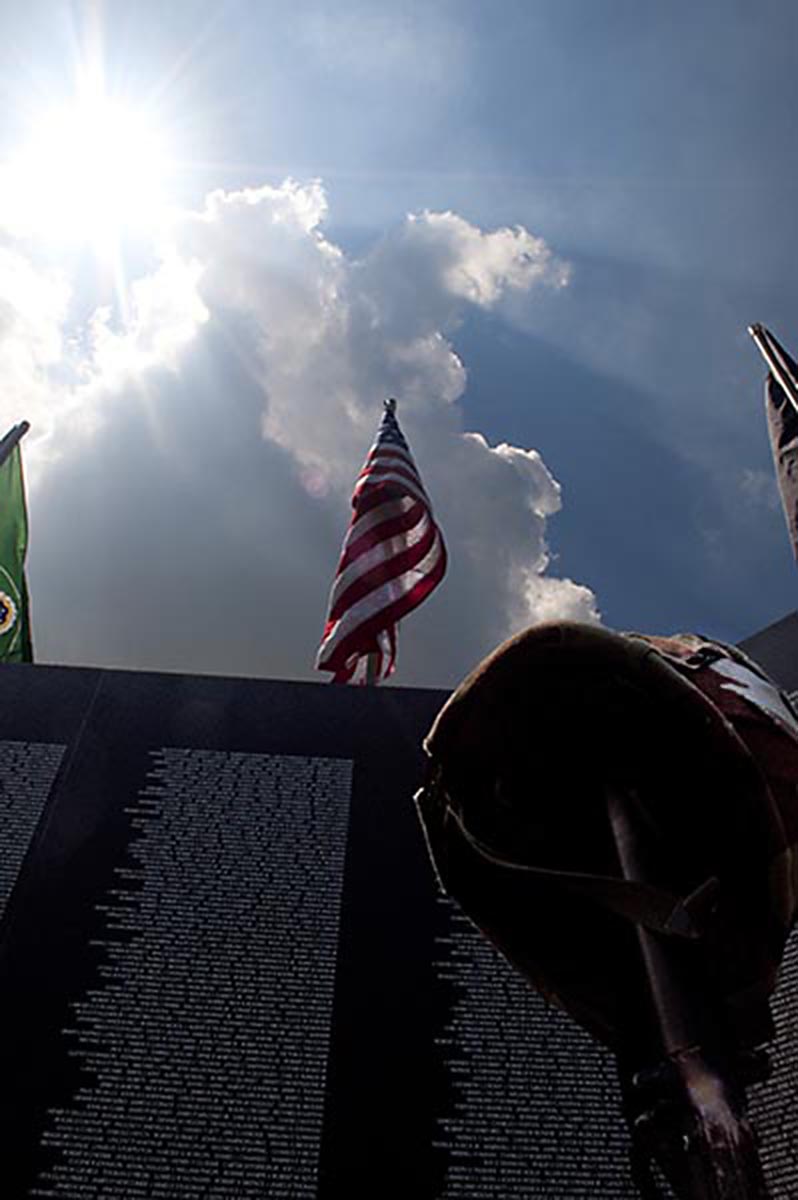 Yes, it’s all before you, “…The sky is everywhere, it begins at your feet.”