To the Rhythm of the Surf…Bliss

The bliss started when I saw the sea. It always does.

The ocean churned one recent day, but I waited till the tide was high to walk its edge. I hoped to capture some cool explosions of white water against black jetty rock, maybe even a gull or two in the mist. But when I got to my local jetty no creature was there to capture in my Nikon net; no gulls, no terns, just me and the sea. And that was okay.

I could have walked down to the next jetty where winged denizens awaited but it’s refreshing to just see the sea expressing itself.

Then I paused, holstered my camera, and just settled into my humble meditation. It has a calming affect on me, something extra I can bring back home besides a sensor full of photos. So I stood and just watched…wave after wave. But it was high tide in my mind as well, and thoughts came to me there… in wave after wave.

I began to focus on my breath, my reliable channel to stillness. But then a thought came to mind, a quote Cheryl had created and engraved upon a necklace, “Breathe to the rhythm of the surf.” I let that thought, beautiful though it was, rise and recede as well.

Just then I noticed a flash of red in my left peripheral field. A person, I could not tell whether male or female, had passed behind me, apparently to avoid disturbing my view. All I could see was white hair flowing over a red jacket collar. The red, so distinct against the white sand, it called me to snap a shot as it receded further eastward.

A while later, from the boardwalk, I spotted the figure coming back. It was a man, a man who I could now see bore a striking resemblance to the ocean I was just shooting. His hair whipped and curled as if crashing against rock, his beard flowed eastward with the wind, his jacket a red buoy. 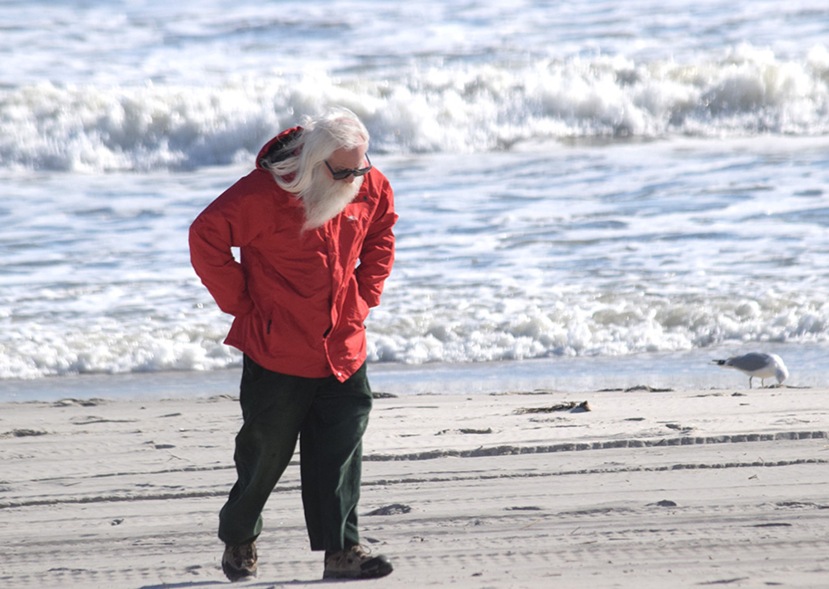 Through my zoom lens he seemed a man of not style but nonchalance.

A relaxed-fit man in this relaxed-fit seascape, he stopped at the water’s edge. Then he stood at just about same spot as I did when he passed behind me…and just watched the sea.

After some time he headed for the boardwalk. As he approached the top of the ramp I told him I had taken photos as he walked the shore. I also said that I thought his hair and beard were a reflection of the sea. He said with a smile, “Yes, it’s churning.”

HIs name is Will, he’s a retiree and happy at it. He likes walking the shore to, “clear his mind.” He seemed to be an astute observer of what is valuable in life, among them these beach walks. Will often walks in Manhattan too to visit art exhibits, attend concerts: rock, blues, bluegrass, jazz. He said there is a lot of diversity in his love of music.

Yes, a wise man, moderation in everything, mixing genres of music as well as alternating shore and city life, as needed. We agreed there is a certain electricity in the air of New York City, the second City by the Sea. He loves Manhattan, he says it’s his “playground.” He takes courses at NYU as well.

Will prefers, as do I, less architecture and more nature in sea-shore walks. He pointed out to me that treks to the west of Long Beach, where the high rises give way to receding frame homes behind the dunes are the most comforting. “There are no tall structures,” Will said.

There’s a balance here, a yin and yang of life. Apparently Will, like many of us, loves the excitement of Manhattan, its underground rumbles ricocheting off tile walls while at the same time rectangular towers of glass and steel soar above, the masses moving madly through both.

Then the counterbalance of serenity walks. The natural walks amid breathing seas or rustling leaves…all treks of ease.

Most often, to me, the high rises of Long Beach are benign to the flowing grace of the shore. But when I give them thought, I’d rather just see the sand and sea. 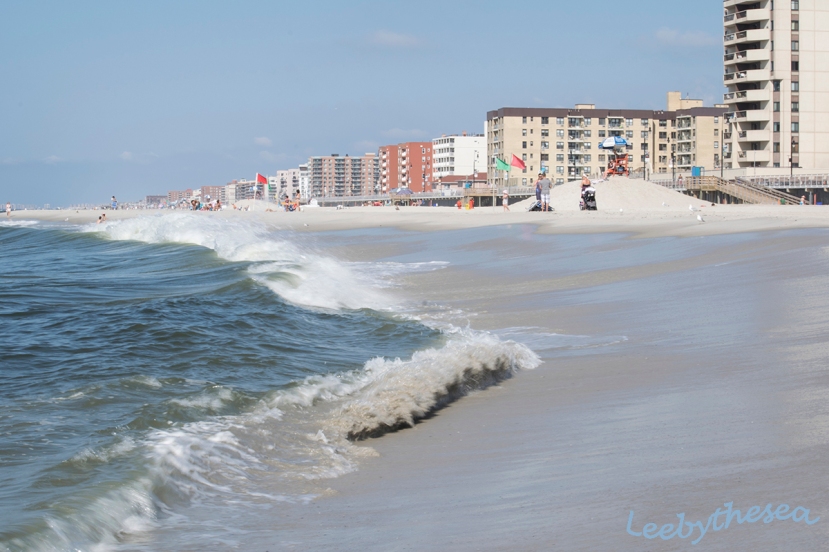 The East shores of Long Beach. In my view…I like less structures…in my view

Yes, I thought, he’s right, there’s a more natural feel to those western parts of Long Beach, just the sea, the sky and the dunes. The gentle, sensuous curves of the dunes are part of the natural art of the shore.

The entrance to the west shore of Long Beach

I’ve always felt an innate resonance in any nature walks. Sometimes when walking through a woods I’d feel an urge to dive right into the leaf-covered soil…and just swim in it. I was home.

But still, the sea is best for me.

I’ve read recently, (The Nature Fix, Florence Williams) that nature, to put it most simply, just makes us feel good. There is a lot of technological terminology about it like the “biophilia hypothesis” in which the nurturing elements of nature helps us regain  what we lose through “progress”. We find an affiliation with nature and it’s creatures. In other words, as I said, it “just makes us feel good.” Maybe a bit of bliss too.

We are, after all simply creatures of the shore, just as the gulls and oystercatchers are. They struggle to survive, protect their young, just as we do. But with no worries about remembering passwords or adhering  to retirement plans.

Oystercatcher, right, chases off gull which threatens its chick

We are certainly still physiologically adapted to nature after having evolved 99.5% of our time in it. So of course we feel a lot of comfort in natural surroundings. 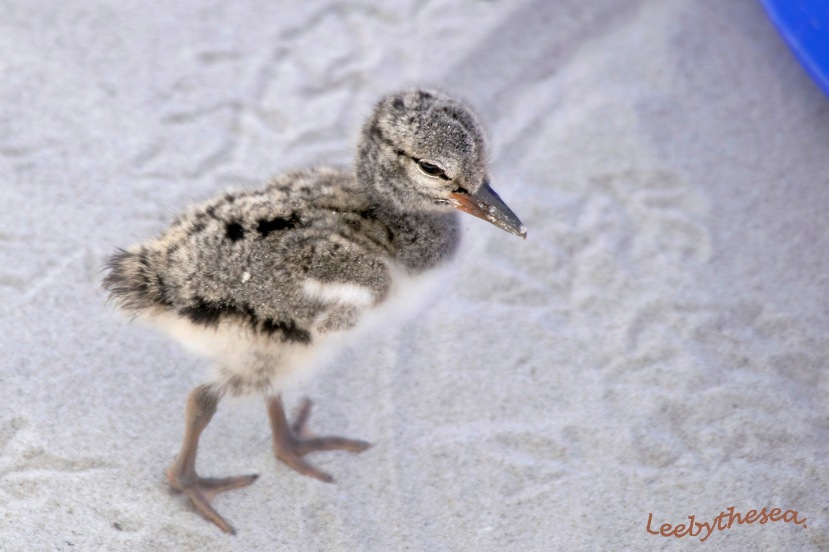 Oystercatcher chicks will be soon appear, once again, on Long Beach shores

Speaking of electronic screens. I’m sitting here typing away at my keyboard, quite happy as I commit to this passion. But when I’m down at the surf and this indoor place comes to mind…I’d rather just be at the sea.

When I’m there…I’m there. The sights, scents and sounds reawaken a primitive place in me.  When I suck the salty air so deep behind my nose I almost taste it in my retinas. There’s a poetry of sights woven with a harmony of sounds, the rhythmic crash of surf, the cry of gulls, the blue sky, a sea in itself upon which scudding  cumulous sail.

Sunsets, over city or sea can drop the jaw in awe. They are not only sublime in themselves but they are also restorative. They heal our stress…maybe even our souls.

Add to that the magic of walk-as-exercise, maybe a pause for meditation and…Voila. What’s not to love? To walk in the park, to hike in the woods…or just drift like a red buoy…along the City by the Sea…bliss.

You are welcome to visit also my sister site: https://wherethesundontshine.net