She wasn’t really alone, she did have her friend to tell this to. She’s also not alone in that she does have me now, if inadvertently, to pass her thoughts on here. And I think her thoughts represent many people.

That got me thinking about being alone in these Coronatimes.

I used to be alone. It was after my divorce. The aloneness powered me out of my apartment and into the wild world, I could deal with it better that way. Getting out of my “new” apartment was an exhilaration: https://tinyurl.com/yd7c7j9t 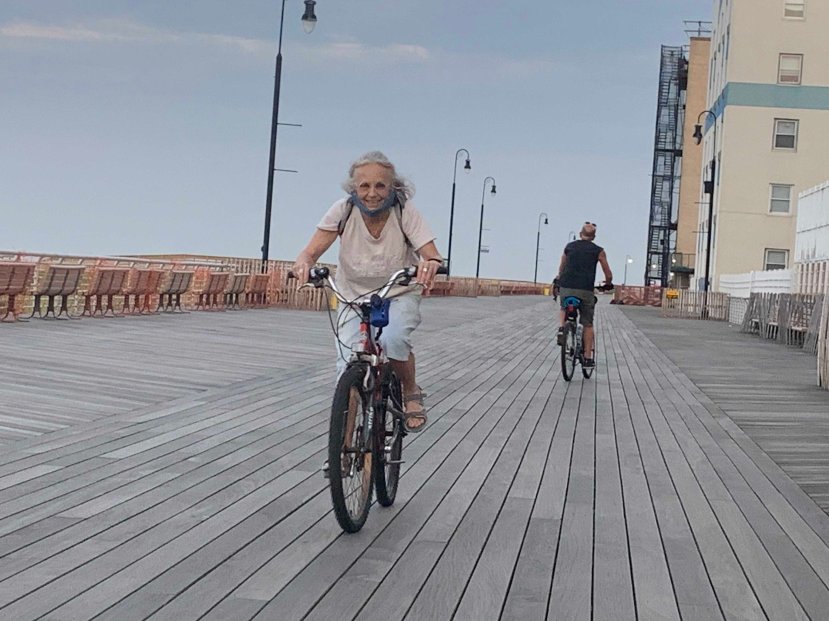 My girlfriend, Cheryl bikes the boards at a much faster pace, so we bike separately.

But the call of outdoors still pulls me. And outdoors to me means the surf, the sand, the sun, the salt. I’m certainly not alone on the shore. The gulls, terns, and oystercatchers share their conversations with me, their cries, their screeches. I even have conversations with people.

People find joy at the shore, just being there is healing. But one can join groups, meet people of like mind, make a difference in shorebird survival.

Here is Audubon’s link. Check out their pledge: https://ny.audubon.org/birds-0birdsways-help/be-good-egg

My brother, Rod, in assisted living, is COVID-precaution alone. He doesn’t have it but he deals with the precaution admirably. No whiner, he. He’s been on basic lockdown in his room for nearly four months now. He does walk the hall a bit to keep his lungs working, but he can’t leave the building. That restriction is being adjusted now and visits in the courtyard are beginning. But he’s found a way to escape beyond the walls, beyond the courtyard—he reads. He reads a lot about cosmology, and quantum mechanics.

Lee and Rod on the old boardwalk

He wonders why so many people complain about being homebound in houses with yards and patios, apartments with terraces, even beaches. He has his 12′ X 12′ room, his TV, his computer, and iPad.

He may be physically homebound, but every day, through the internet, he’s either in interstellar space or roaming the neutrinos in the quantum world. Whenever I call him, he sounds terrific. It’s a  matter of mindset.

This kaleidoscope reflection photo shows our window-chat-by-phone visit at his assisted living.

My brother, Rod and Dani, a very Essential worker

Here in Long Beach, I biked the sidewalk to the boardwalk. It was very early in the morning just after the July fourth weekend. I passed a gray-haired lady wearing a white jacket, perhaps against a morning chill if there was one; there wasn’t—it was 71°. But she chugged along with a vibrant stride.

Atop the boardwalk’s entry-ramp nature’s sixth-of-July full moon show rose before me.

I hopped off the bike and started shooting. The full moon was a surprise, which made it all the more potent. I took a lot of shots of nuanced reflections off the sea. The height of the moon only grants subtle color, but it does evoke the mystery of the morn. Soon, the lady in white whom I passed, passed me.

The moon’s sky-show wasn’t the garish display I’d seen from my terrace all weekend; the show that caused me to plug my ears at 2:00 a.m, the show that trembled the bones of our pooch Scout.

But fireworks were fun to photograph. 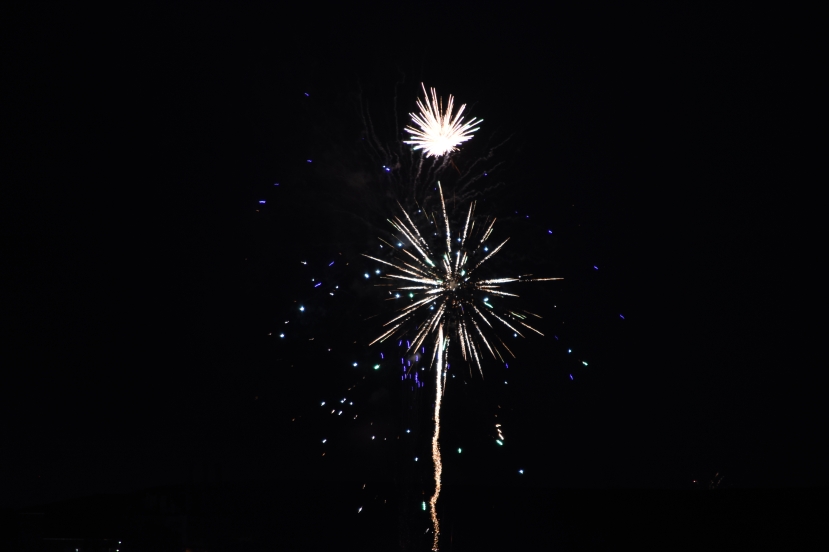 These were the illegal air bursts carpet-bombing neighborhoods across America. I recall the fireworks of old: roman candles, cherry bombs, ashcans, one-and-a half inchers and ladyfingers. Today’s “salutes” (as my dad called them) are more elaborate and thunderous. And as ubiquitous as bombast in Washington. 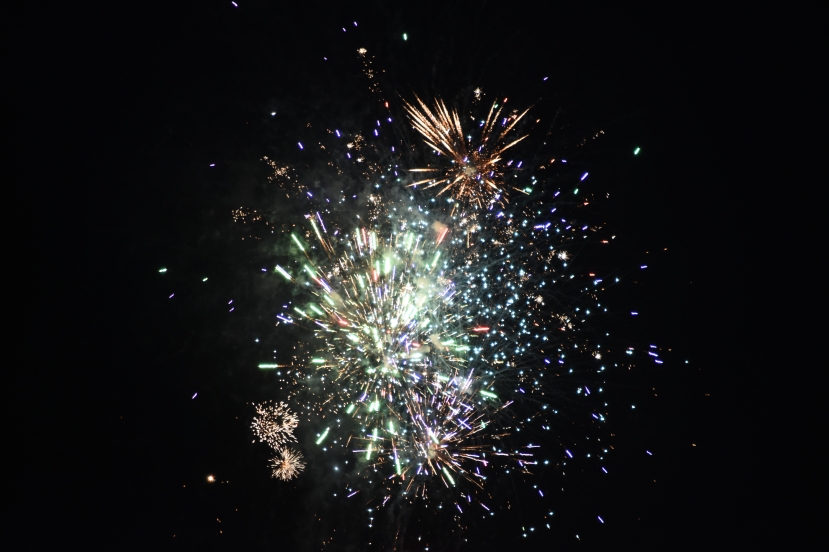 But on my early morning ride, I beheld a kinder air show, one that was balm to the mind. Only the gentle lap of the sea could be heard. Gulls swooped to meet la Bella luna. A soft breeze caressed my cheeks.

The moon unseated another biker, she too pulled in by its gravitational allure, the allure which billions of hominids felt before us. We both stood alongside our bikes, alone but together.

I tried for some cardio peddling, but the moon’s gravitation kept pulling me off my bike.

I’d speed along then spot a composition: Jetty-moon, lifeguard stand-moon, dune-walk, moon.  The lady in white passed by me often, striding silently. Her equanimity contrasted with my frenetic off-and-on antics. She floated by, a silent white sail on a sea of boards.

I was getting more exercise pummel horsing my bike than I was peddling. But I didn’t mind, I was happy to be there, glad to catch the show. One only captures the magic of early morn in, well…the early morn.

I was in the midst of it, and the morn was waning. I and many like me try to capture this magic and bring it to others, like you, dear reader. Most of them go to the shore alone, but we are alone—together. Together, in our hunt for beauty, together, often producing art, together sharing it with others. When we share, we are together with the recipient, if just for a moment. The click of our shutter just might click with you.

The lady in white was not alone. She was with me and others this early morn. Her choice: just to be with the sea…the gulls…the moon. Maybe to just get some exercise. No need for a camera. There’s a lot to be said for that. Sometimes ya just gotta stop and smell the salt.

In these unstable times, one searches out stability. And nothing is more stable, more permanent, than the moon, the sea’s waves, the sands of centuries. Humans have trekked shores for hundreds of thousands of years, feeling soft breeze or winter gale on hairy leathered faces. These souls paused in their struggle for survival, just to taste the same salt air that I pause for, to gaze at this same silver orb, in awe. So when I stand at the water’s edge, I am not alone, I stand with them on this planet, just at different times. But their eyes stared in wonder as do mine. I feel oneness with humankind, those before me, and those after me. Maybe what our world needs more of is realizations of oneness. 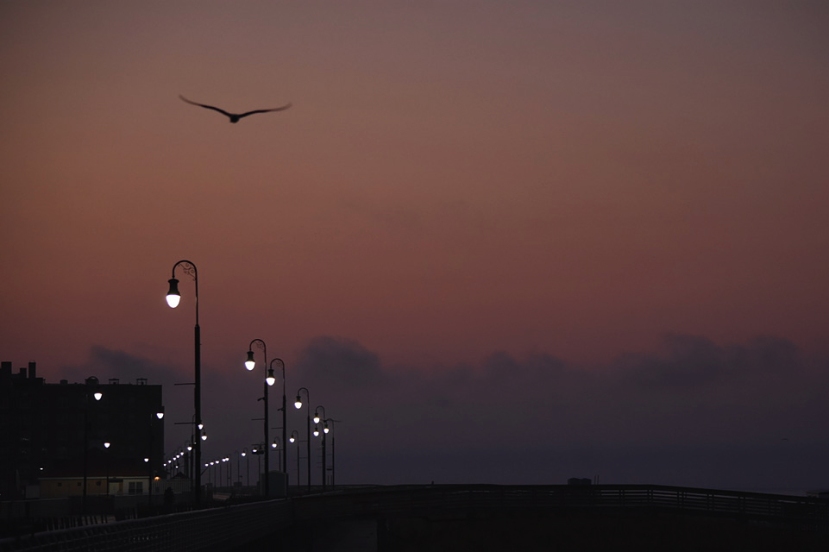 If I, and maybe you, can embrace such kinship with primordial man, why not with the brotherhood of today’s humankind? 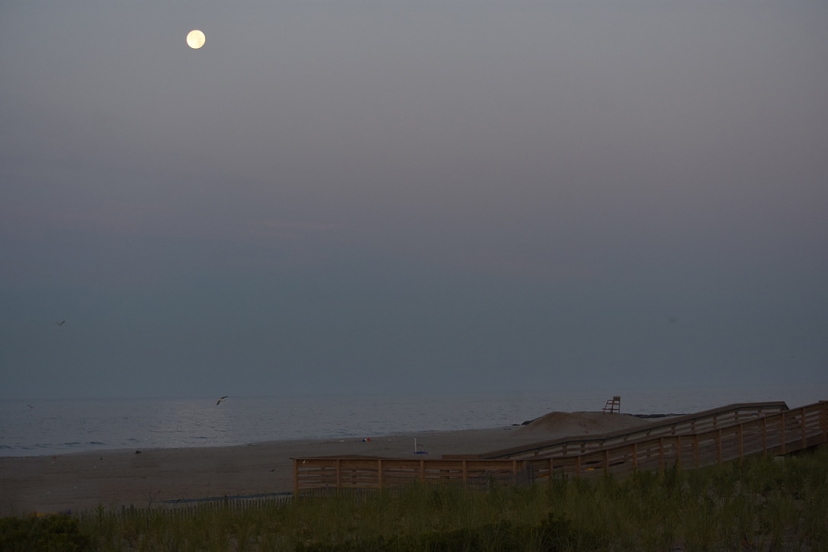 The Fourth in Long Beach wasn’t celebrated so robustly this year. There were no big gatherings, no official fireworks. But flags, always popular in Long Beach made appearances on beach and boards. 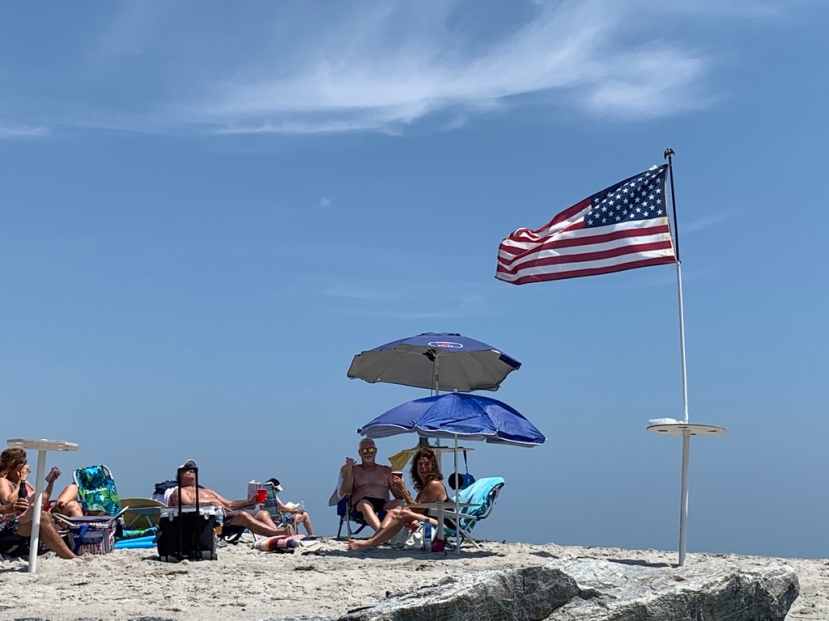 Beach Burger had their red, white, and blue up. Best sweet potato fries on the planet too:

The stars and stripes represent one-out-of-many, togetherness. But that togetherness is strained these days. We have our very serious disagreements. But we’ve had more serious differences and we’ve survived them. So I’m confident we will persevere, we will heal.  We are still the United States of America.

I came upon one last composition upon which I could reflect. I saluted part of it, our flag—with hope, the other, our moon—with awe.