When the Slot Bites, With its Teeth Dear…

…scarlet billows, we need not dread.

Inspector in Charge NY Div. USPS: “There has not been one episode of mailbox fishing from the new collection boxes…they are considered the Cadillac,” of boxes.

He may call them Cadillacs but I call them…the “blue sharks.”

I was happily informed by Long Beach neighborhood watcher, Alex Schmidt, that the graffiti- warning collection box at Pacific and Park was replaced with a new box.

Alert observation, Alex, thank you. “Hoorah! Progress!” I reported on the mail theft/check  washing problem in my previous post, “E-Z Check Washing at a Corner Near You”: https://tinyurl.com/tl3833b

The new thin mail-slot boxes have already been installed in every box location in NYC. The northeast is the primary area of the U.S. receiving those new anti-fishing boxes: https://tinyurl.com/thin-mailslots So, if you don’t have them yet, they are a-comin’

As Donna Harris spokeswoman for the U.S. Postal Inspection Service said, “It’s safety, with anything. Twenty years ago maybe you wouldn’t have locked your door or locked your car. But as time changes we all have to change with it.”

I can’t say I fully agree with Donna. Twenty years ago we still locked our homes’ doors and cars, at least in the NY metro area. But yes, time changes.

This mailbox fishing is just the “analog” version of the digital theft we guard against on our computers. But the thieves take advantage of any opportunity. We just have to keep reducing opportunities. It’s exhausting and often greatly increases the inconvenience of law-abiding citizens. To say the least!

At Park Ave and Pacific Blvd: The new thin-lipped collection box, free of its graffiti warning.

So, on my way to my swim yesterday I wanted to see if the new box at Park and Pacific was an anomaly. I stopped at a collection box at Magnolia and W. Bway, it too was replaced. But protruding from its thin slot was a padded manila envelope.

It looked like someone tried to insert it, couldn’t do so, then…couldn’t get it out. I contemplated trying to pry out it and take it to the Post Office. But I thought, “This is U.S. mail.” Or, “Maybe it’s a setup and I’m being recorded on video.”  I’m reminded of “dollar collars” of years past when dollar bills were wrapped around paper to present a “wad of cash” protruding from “sleepers” in the subway. I drove off. 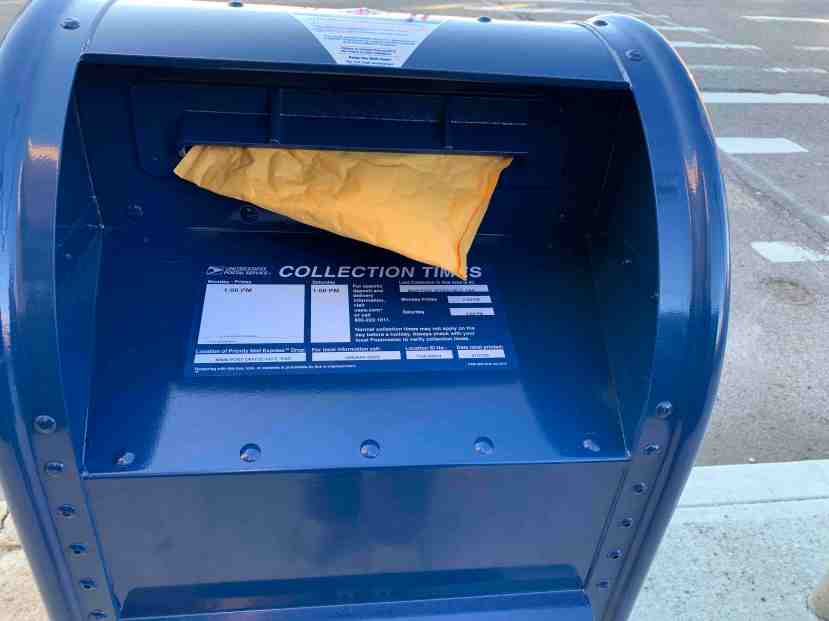 But a block away I thought “Whatever is in that envelope is sure to be stolen if it’s left there. I’d be acting in good faith.” I made a U-turn back to the box. Clearly, dear readers, I have too much time on my hands these days.

Yes, I had a second, second thought, “Whatever is in the envelope can’t be too valuable or the depositor would not have left it so vulnerable. If they left it, why shouldn’t I?” Off I went again. I didn’t call the Post Office to report it, would have been the best choice. But the mailer might have done so and inexplicably left. Maybe it wasn’t so valuable?

On the return home I stopped at multiple boxes, all were new, all had thin slots. I carefully examined the closest box to my home and saw…the teeth. They are meant to prevent mail fishing by thwarting extraction of mail. But they appeared shark-like, waiting to chomp envelopes too big for the slot.

I gingerly put my finger into the slot. The teeth moved in but not out. Whatever passed over them was not be coming out. The padded envelope at Magnolia Blvd just might have passed through the teeth but its contents (Acme gel pens? replaced by Uni-ball #207s?) might have snagged and lodged.

So, all of you who don’t want to go to the Post Office to return an Amazon purchase, think twice. Your puffy padded envelope might fit, but it also just might get stuck in the maw of the mail shark, especially if its content is snagable.

I later considered my rapid and transient thoughts as I was exposed to the stuck envelope: I wasn’t about to take something that’s wasn’t mine, that’s my policy, and virtually all of you guys. Others who come upon such vulnerable mail might not have such a policy. But, when your immediate response is “do the right thing” you don’t have to worry about risk/rewards and consequences.

My policy has kept me in the driver’s seat of many patrol cars and not in the rear seat with my hands cuffed behind my back. I’ve pointed out to many so-positioned “passengers” en-route to the Crossbar hotel the difference in our seating and its implications. I suspect many of them would rather I get them to the slammer quickly so as not to have to endure my cruel and unusual punishment.

I spoke with Postal Inspection Service spokeswoman, Donna Harris. Ms. Harris said all the boxes in NYC metro area are being switched to the new boxes, to be precise, the model is the 1170 LAN 2,  the second version of thin-lipped boxes. It’s the state of the art mailbox,

I also spoke with Inspector In Charge of the NY Postal Service Div, Philip R Bartlett. Insp. Bartlett told me that most of the mailbox fishing had been in the Bronx. When they installed the new boxes there the thieves went to Manhatten, then, Brooklyn, then Queens. Now they are in Nassau and Suffolk. At least two who were arrested this month in Long Beach were from the Bronx. But most thieves from the Bronx would rather go to NJ or CT than travel to Long Island, Insp. Bartlett reported.

Insp. Bartlett said there has not been one episode of mailbox fishing from a new box. He said they are considered the Cadillac of mail collection boxes. In addition to the “teeth”, they have secret internal anti-theft modifications. Also, Graffiti comes off much easier due to special paint on them. I recalled that paint being introduced many years ago on NYC subway cars. Technology once again to the rescue.

Re: the bulky envelope in the boxes, Ms. Harris said the boxes are for letter-size mail, anything over 13 oz should be taken to the PO.   Insp. Bartlett added, if a puffy envelope gets past the slot it should go down. He said they don’t have many episodes of stuck envelopes.

When I described my experience he agreed that something inside the envelope might have hung up. Anyone coming upon such a situation should call the PO, they will send someone right away. 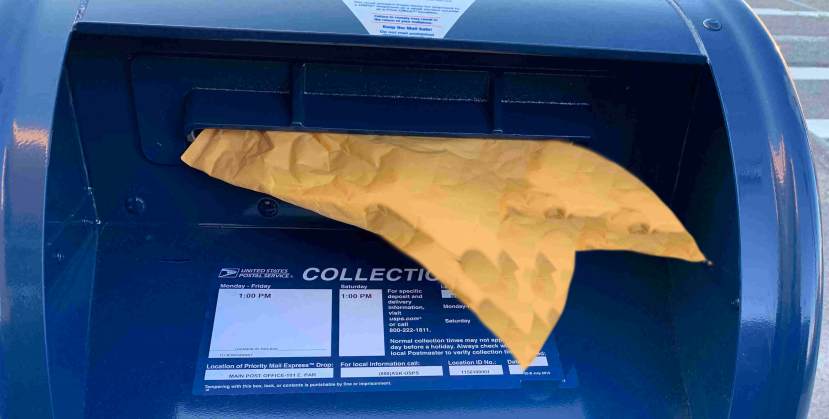 “Fish” envelope, as I saw it, in the JAWS of the blue shark.

“The times they are a-changin’, sang Bob Dylan…”when the waters have grown…and you’ll be drenched to the bone.”