“This is not the library, ya know!”

I recall my teen years visiting the local stationary or what we called, “the candy store.” I’d pick up a magazine and thumb through it. Sometimes my teen radar would take me to either the profile of the ’55 Chevy or the 36 D headlights of Jayne Mansfield. But I was soon to be informed by the lady at the register, “This is not the library, ya know!”

Not so today. I visit the local Barnes and Noble and I can pick up a magazine, buy a cuppa and sit myself down to peruse and sip. No problem. After scanning the mag I can buy it or just plop it back into its slot and depart, or get another. All is fine. Just don’t take any material into the bathroom. Don’t believe me? Ask George Constanza. 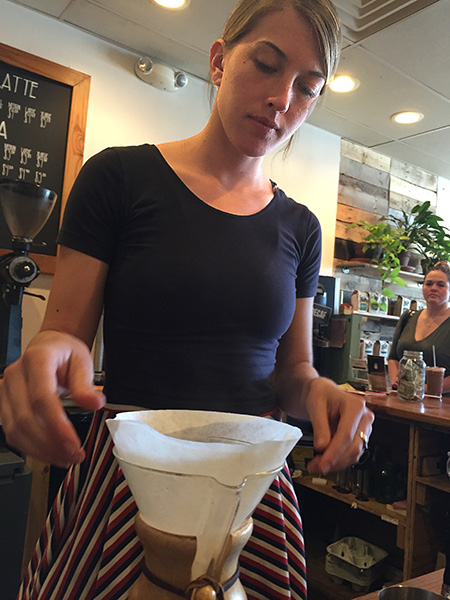 For those of us who recall times of only diner or luncheonette coffee meets…today, our cups overflow. Back in the day, you were expected to eat, pay, and, “have a nice day”.

I’m amazed and delighted to see casual coffee shop conversations that can go on and on. No wait-staff asking, when we dawdle a while, “will that be everything?” No owners looking askance over the rims of glasses. Just pleasant baristas making the next joy java.

A gentle view:Laptop and waffle breakfast at Gentle Brew

Coffee shops go back to 16th century Constantinople. In the 17th century the new and exotic stimulating elixirs of coffee and tea appeared in Europe. The coffee houses were places of discussion and discourse. In England, because of an entrance fee of a penny, they became known as “Penny Universities”. A shop in Oxford, England, the Queen’s Lane Coffee House was established, 1652…and still remains in existence.http://www.qlcoffeehouse.com

The Gaslight Cafe was a coffee house in Greenwich Village that opened in 1958. There was often more percolating than the brewing of coffee at this coffee house. Words of inspiration, motivation, poetry, wafted amidst the coffee aroma. Alan Ginsberg, renowned poet of the beat generation expressed them often.

Also appearing among many, many, many,were Bob Dylan, Jimmy Hendricks, Eric Clapton, Jose Feliciano and Bruce Springsteen. The applause in the little coffee house was so great that neighbors complained, leading the house to use finger snaps to replace handclaps. The shop closed in 1971. 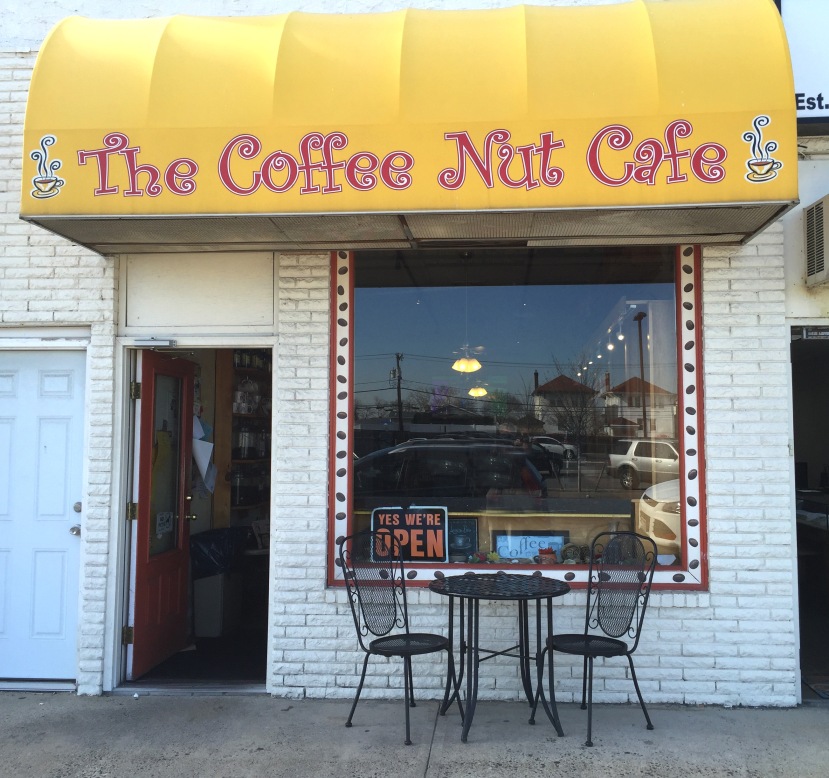 Coffee Nut’s Icing says what it IS!

From any of our Long Beach Cafes you can walk to the beach or a Manhattan bound train. We enjoy the best of two worlds.

A daily guest, Harless Daniels, a gent of 86 years, died over the winter. He was honored by a memorial at the seating place he frequented so often. That’s the kind of place it is.

His family had him cremated and there will be a memorial for him on the beach in May. That’s the kind of place Long Beach, NY is. 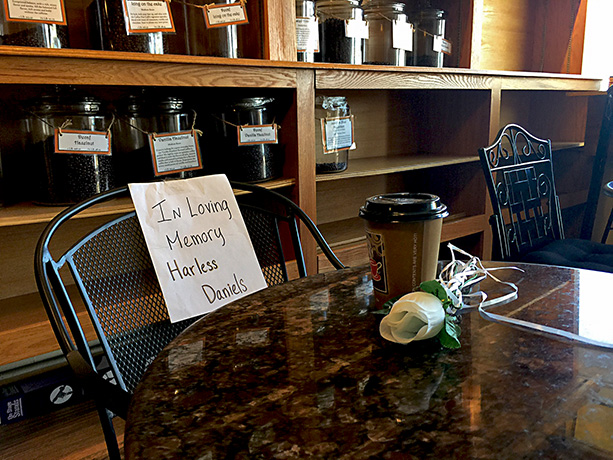 Panera Bread is not quite a “coffee house” but it does serve very fine coffee…and bread… and lots more. They are very user friendly. Recently, at Panera of nearby Island Park, I saw two tables of Mahjong aficionados.

One gal expressed, over salad, how grateful they were that the manager allows their play gatherings. There is a welcome ambiance and communion that is fostered in coffee houses. A human-to-human comity that tends to bring us together as people came together around a fire thousands of years ago. And that’s a very good thing. 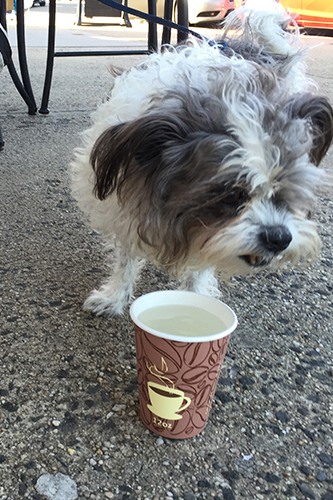 There are about 24,000 Starbucks around the world. The massive chain of coffee houses are favorite places to meet for many reasons.

At our Long Beach, NY Starbucks I see laptops and schoolwork, electronic spreadsheets and MP3 engrossed heads, all living the viva local.

I see job interviews and staff conferences, I see checkers and chess. I see the lonely and the lovers. The seekers and the sought. And the just plain…relaxing coffee drinkers.

The outside seating is great to soak up the sun or to have your pooch share the moment.

Many people make it a routine part of their day to sit and sip and chat. Some singles go  for a possible “chance encounter” of another single.

But it was at Starbucks where I spotted…the spotted pants.

I spied a young lady whose denims stood out for their artistic flair. They had paint brush stokes down the right leg. I approached, Jesse, the wearer of the denim canvas, and she allowed me to capture them.

But as she waited for her brew to be concocted, I asked if she bought the jeans that way or if she was an artist. The jeans were genuine, it turns out, she paints in acrylics. But it also turned out that she was much more than than an artist. She’s starting a very unusual non profit business.

Over coffees she told me she used to be a barista in this Starbucks. She said she was in an abusive relationship then, about four years ago, but was able to end it. Now she is starting a non-profit hair dressing business. It will be a mobile hair salon to assist women who were also in domestic violence.

She will drive the mobile salon to various Outreaches and Women’s shelters all across Long Island. Such women, she said, often have problems with self image and need help in that area to prepare for new careers…and lives.

She said “When you have domestic violence it’s really hard to be at peace with yourself and your self image, so basically I had a good way to get out of it but if I didn’t have the hair (talent), I’d probably still be with him.” I asked if I could tell her story and she said, “Yes, it honors me.”

Jesse, on a mission to make a difference

In addition to giving women a new do she will even help with makeup and job interview skills. She hopes to help raise their self confidence toward independence.

She has been in contact with Albany for a year and finally has the approval for the non profit. She’s hoping to obtain grants from cosmetics and beauty sources.

But right now she’s trying to do a fund raiser to purchase an RV and fit it for her salon. But so far she can’t find a place to hold the fundraiser for free. Just then a woman passed our table on her way out the door and placed a gift card of $10 in front of Jesse. On the card folder it said, “Continue the good work”.

She said when she was a child she used to go into the city with her mom. While there they’d to to MacDonald’s, ” I’d get those dollar burgers that they had and give them out to the homeless people on the street.” She said her mom thought she’d be helping people again as an adult.

Jesse finds people fascinating and says “It’s very good if you can get them to open up about themselves.” Right away I thought how she was opening up to me. As she spoke I could feel her resolve, her passion. She had been through the crucible, as have many of us. But she was going to make the trial bear some good. She was going to pay forward her break.

Jesse went to college for a year but her mom got sick so she had to leave school to help her mom. She now teaches painting at Paint Nite: http://tinyurl.com/Pnt-nte and works as a Nanny as well for a family of four. She said she  needs an RV to start a Salon-on-wheels to obtain the proper certification and possible funding.

She said she loved every minute of working as a Starbucks barista. She loved working close with people. She said, “I loved the morning shift. I’d be here at 5:30 in the morning to set up and you’d always get the same crew getting their train, getting their coffee.”

She remembered one woman particularly. She said, “She’d get a Venti quad non-fat and a blueberry scone.” She said if she saw the woman today, (four years later) she’d remember her, “not her name but I’d know her as the Venti-quad-non fat-blueberry-scone lady” she recited it flawlessly again. Jesse is out of a very bad relationship and into a very good one, she’s getting married in August. She’s going to make a difference in the lives of others. Her cup overflows.

(If you’d like to help Jesse to help others, either with a fundraiser venue or otherwise, you can contact her at: 516-477-0653 or copy and paste her email address: jessiestravelingbeauty@gmail.com)

Now Starbucks of Long Beach is about to have wine and beer served  afternoons and evenings, their usually slower hours. There has been some community resistance saying, among other things, that there are enough alcohol establishments in the area already.

I guess we’ll just have to wait and see. But I’m guessing they’ll be a rosier glow to the coffee house ambiance, perhaps causing any nearby Chevys and headlights to look even more appealing. Might even lead to more “chance encounters”.

It’s not the library, ya know.