Making your sad go away

By leebythesea11 on March 21, 2014 • ( 3 Comments )
From David Wong’s,  John Dies at the End, “The kittens will make your sad go away.”
That’s true, puppies too. But even if your not sad at all, creatures of many types can put a grin on your kisser.
Cheryl, I and a few other animal lovers came upon some kittens a while back that were ensconced in the attic of a house, they came out onto the roof to make their presence known. The house was on the corner of Roosevelt Blvd and Shore Rd.  in our beautiful City by the Sea, Long Beach, NY. 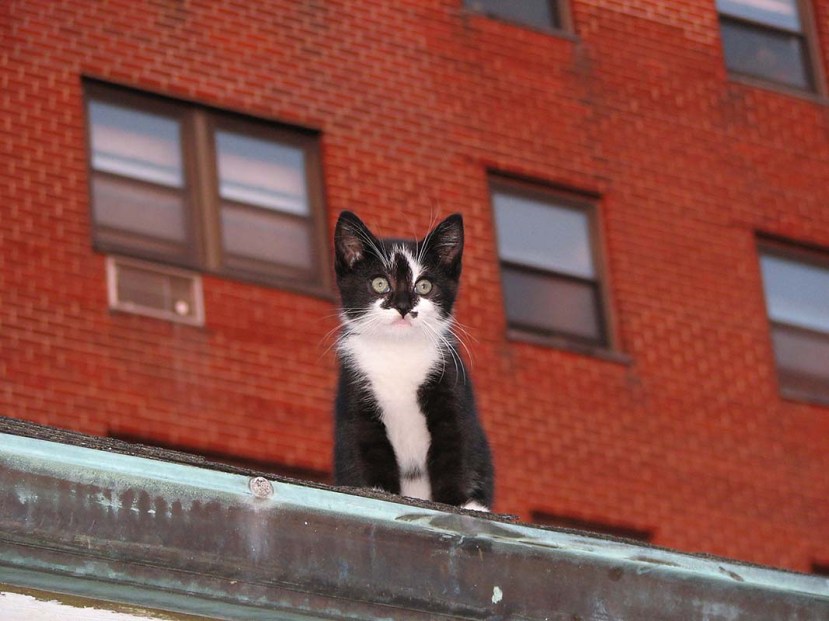 The one-story house is a rental but it was vacant at the time. The kittens were meowing incessantly for food from that roof-perch so Cheryl, I and the others periodically brought them some sustenance until more humane help could be obtained. The kittens would creep out of a dark opening in the gabled eave that led from the attic and would come down to the gutter for their feast.
One day Cheryl and I tried to put a can of cat food at the edge of the roof just above the gutter. But it kept sliding down the roof and threatened to spill onto the ground. I needed something to stop this slide.
So I picked up a piece of plywood nearby, a scrap really, of only and about 9” X 18” and 3/4 inch thick . It would have  been better, of course if I had found a piece of paving slate, or better yet a brick but the scrap of wood is  what I had and that scrap is what I used. Then I saw that the law of good-will-synchronicity was at hand because I also spotted nearby a broken metal kitchen stool that was being discarded so I used it as a step stool. Cheryl steadied the rickety thing as I placed the wood scrap just above the gutter. 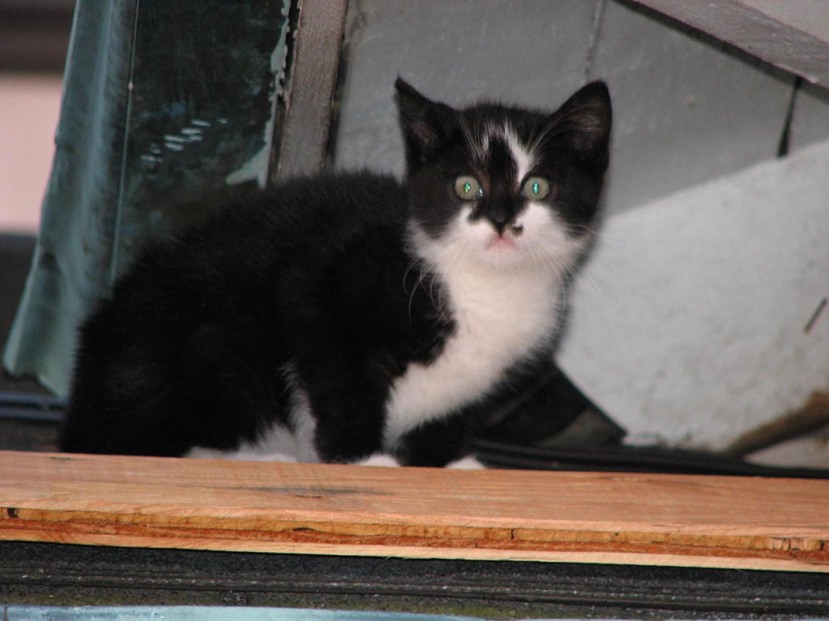 The piece of wood seemed to have enough surface traction on the asphalt-shingle to stop it and the can from sliding down the decline. I figured it would provide at least some temporary service.  We then placed the can of food just above the wood and voila, it stopped the can from sliding and the kittens dined alfresco. Simple task fulfilled, no magic here of course. We went back the next day and the piece of wood was still in place. A fine temporary feeding fixture. 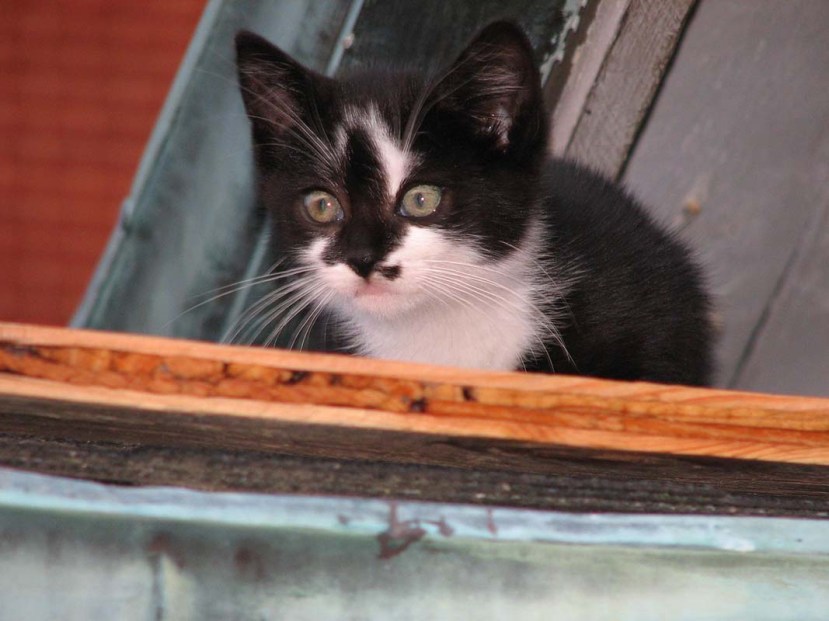 Eventually the kittens were rounded up and placed for adoption. But ya know what? I go past there almost every day now and the friggin piece of wood is still there…and we put it there in 2007… seven years ago!

Now, we only laid it on the roof, no nails, no fasteners, no adhesive at all.The beach is only a half block south and the house and the plank are in the windy canyon directly in line with the onshore blasts.

Not summer gusts, fall hurricanes, nor winter blizzards have budged that piece of scrap wood in all this time. We had hurricane Irene and Sandy too and I don’t know how many Nor’easters visit us here in Long Beach since that day. Many thousands of residents were displaced by infamous Sandy but with all those winds blowing off the North Atlantic for seven years they have not caused that tiny plank to slip an inch. The Atlantic Sandy-Surge put the sea right in front of this spot above, winds whipping the waves up Roosevelt Blvd, destroying cars and house contents.
The house has been rented out since that time, even had some renovations done to it, including the sealing of the hole to the attic,  just up from the wooden slab. But the scrap stayed right there. No person moved it, nor did the relentless ocean gales.

I suspect some renters thought the piece of wood had some kind roof-utility and didn’t want to mess with it. While walking our pooch, Bailey, about a year or so ago I pointed out the scrap to  a tenant living there and I related the story to him; he had no problem with it staying there.
As you pass the the corner you can see the piece still nestled in its spot, weathered and warped-gray yes but still waiting to secure another can of cat food if ever a litter of kittens again need some assistance from other Earthly forms.

There’d be no mini-magic in this little story if I did place a piece of slate or a hefty brick on that roof seven years ago, and it still remained. But we can’t understand how this light piece of wooden scrap came to be anchored so fast to it. It just might be that the law of good-will-synchronicity for helpless creatures still plays in the mystical whirlwinds of Roosevelt and Shore.  Or maybe it’s held fast with a ballast of gratitude from the feline god Ubastet, the Egyptian cat goddess of love.

Cheryl and I did gain a grin or two to be able to help those tiny creatures. But there are many creatures, of all kinds on this planet, which we can’t do much for. And that is sad. But these creatures were so vulnerable, so accessible, and so damn cute. So helping them does make the sad go away… even if  just for now, even if  just for these creatures.
Be well,
Lee
PS
I’ve been called Ubastet a time or two but I suspect it had nothing to do with Egypt. 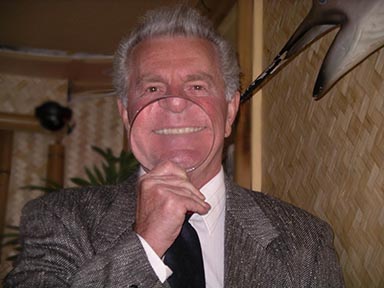